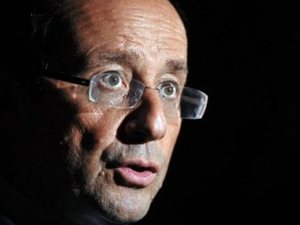 The French left votes Sunday in the second round of France's first U.S.-style primary, called to decide who will take on Nicolas Sarkozy as the Socialist candidate in next year's presidential election.

Facing off for the prize are 57-year-old lawmaker and former Socialist Party chief Francois Hollande, the frontrunner, and Martine Aubry, another party leader who gave France the 35-hour working week when labor minister.

Hollande and Aubry won through from a field of six candidates, after around 2.7 million voters turned out for last Sunday's first-round primary vote, the first time France had used the system.

The poll is open to any registered elector ready to pay a one-euro fee and sign a declaration that he or she supports the ideals of the left, a novelty in France, where previous candidates have been chosen by party activists.

The scale of the turnout has given heart to the Socialists, and recent opinion polls suggest that either one of them could beat Sarkozy in April.

Hollande had only a narrow lead over Aubry in the first round of voting last Sunday, but since then all four of the defeated challengers have rallied to his banner, confirming him as favorite.

But Aubry performed better than expected in the first round and hopes to prove the polls wrong again on Sunday.

She moved her rhetoric to the left during the primary campaign, portraying Hollande as a soft-hearted centrist without the steel to defeat Sarkozy.

The tactic helped her to a first-round showing of 30 percent of the vote to Hollande's 39, and neither candidate scored a decisive blow in a televised debate earlier this week.

Hollande tried to take the high ground, regretting what he said were Aubry's personal attacks, which he said threatened to sow division inside the party.

But despite Aubry's attempts to paint the race as a choice between "the soft left" and the "tough left" in a battle against Sarkozy's "hard right", both she and Hollande come from the center ground within the party.

In 1995, when the last Socialist president Francois Mitterrand left office, they were both apostles of modernizing former European Commission chairman Jacques Delors -- Aubry is his daughter, Hollande his protégé.

While 62-year-old Aubry is a former minister and mayor of the city of Lille, regional council chairman Hollande lacks executive experience.

Ten thousand voting stations across France will at 7:00 am (0500 GMT), close at 5:00 pm, with the partial results expected less than two hours later.

The Socialists hope that whoever wins will be able to use the momentum generated by the primary to take on an increasingly vulnerable Sarkozy.

After five years in office, the president's popularity has been hit hard by stagnant growth, high unemployment and a series of financial scandals.