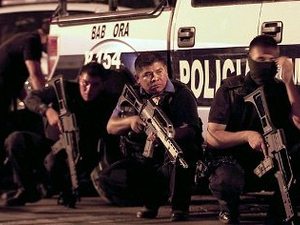 Twenty inmates died and 12 others were wounded during a fight Saturday at a northeastern Mexico prison near the U.S. border, state officials said.

"There was a fight between prisoners that resulted in the deaths of 20 inmates and injuries to 12 others at the penal center in Matamoros," the Tamaulipas public security secretariat said in a statement.

The unrest comes days after seven inmates were killed and 12 others injured in a riot Thursday at a prison on the outskirts of the northern city of Monterrey.

Saturday's brawl started between two inmates and quickly escalated, according to authorities, who said state and federal police had to be called in to restore order at the facility.

The prison, across the border from Brownsville, Texas, has been the site of a number of high-profile escapes, the largest being in March 2010, when 41 inmates broke out. But the problem is state-wide.

Last year, a total of 340 prisoners escaped from the prisons across the region, amid reports of clashes inside the penal facilities and corrupt prison authorities aiding the break-outs.

Earlier this month, 17 police officers responsible for guarding a prison in Ciudad Juarez were arrested, including four suspected of working for the Zetas drug gang, after the facility was found to be used to hide two kidnap victims.

Prison riots and jailbreaks are common in Mexico, where some 230,000 prisoners are behind bars, with 25 percent in overpopulated prisons.

One of seven Mexican states bordering the United States, Tamaulipas is a prime battleground for the powerful Los Zetas and Gulf cartels, whose rivalry often leads to bloody shootouts on city streets, and their incarcerated members clash in prisons.

The Zetas have also been accused in the near simultaneous breakouts of 32 inmates from three jails in eastern Veracruz state on September 19. Fourteen of them were recaptured.

Rising lawlessness as the cartels battle it out for lucrative smuggling routes into the United States, and clashes with Mexican police and military, have raised concerns on both sides of the border.

More than 45,000 people have been killed in spiraling drug-related violence in Mexico since the government unleashed the military against the cartels in 2006, involving some 50,000 troops.