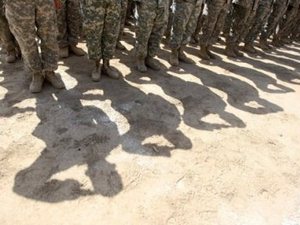 The Pentagon denied reports Saturday that the U.S. military has given up on plans to keep several thousand troops in Iraq after a year-end deadline, saying talks with Baghdad were still underway.

U.S. and Iraq officials have been negotiating a possible American military training mission of about 4,000 troops after 2011, but a dispute over legal protections for the U.S. forces has jeopardized the security agreement.

The Associated Press, citing unnamed officials, reported that Washington had abandoned the plan for a contingent of several thousand troops and instead would have only a small team of 160 attached to the embassy in Baghdad.

In a statement to reporters, Pentagon press secretary George Little denied the negotiations had collapsed, saying the Obama administration had not made any decisions on a future mission.

"Suggestions that a final decision has been reached about our training relationship with the Iraqi government are wrong. Those discussions are ongoing," Little said.

The United States wanted to build a "robust security relationship" with Iraq and the talks with Baghdad were focused on the "nature of that relationship," he added.

Recent comments from Iraqi and U.S. leaders have exposed a rift over legal protections for American troops, with U.S. officials insisting their soldiers must be shielded from Iraqi prosecutions.

But Iraqi political party leaders have indicated they are not prepared to grant such legal safeguards.

All remaining 41,000 U.S. troops in Iraq must withdraw by the end of the year under a bilateral security accord, which remains in force if no post-2011 deal is agreed.