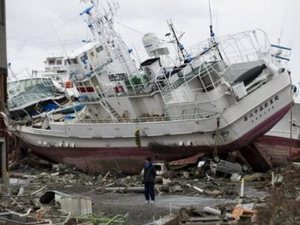 A Russian ship has found debris from the Japanese tsunami, including a fishing boat, floating adrift in the Pacific thousands of kilometers from the disaster zone, a Hawaiian research group said.

The Russian training ship STS Pallada found the debris in late September after passing the central Pacific island of Midway, said the International Pacific Research Center at the University of Hawaii.

"The Russian ship... found an array of unmistakable tsunami debris on its homeward voyage from Honolulu to Vladivostok," it said in a statement.

The debris -- located some 3,100 kilometers from Japan -- was washed into the Pacific by giant tsunami waves that struck the country's northeastern coast after a devastating earthquake in March.

The crew spotted a 20 feet long fishing vessel, which was hoisted up onto the Pallada.

They are trying to trace its owner, who is believed to be from the Fukushima prefecture, the area hardest hit by the tsunami.

"We also sighted a TV set, fridge and a couple of other home appliances," a crew member said.

The 9.0-magnitude quake and tsunami in Japan left 20,000 dead or missing and crippled cooling systems at the Fukushima plant, triggering the world's worst atomic disaster since Chernobyl 25 years ago.

Scientists at the university, including senior researcher Nikolai Maximenko, estimate that tsunami debris from Japan will wash up on the shores of Northwestern Hawaiian Islands in one year and the U.S. west coast in three years.