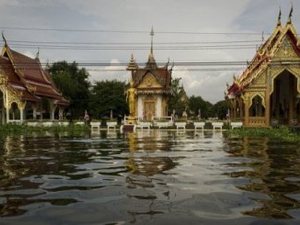 Flood defenses protecting the Thai capital held up Sunday, but the advancing waters that have swamped inland regions still threaten to engulf Bangkok and escalate a disaster that has claimed 300 lives.

Thailand's worst floods in decades have inundated huge swathes of the kingdom, swallowing homes and businesses, shutting down industry, and forcing tens of thousands of people to seek refuge in shelters.

Authorities are battling to protect the capital which is ringed by defensive walls that have so far largely prevented major flooding. But their efforts have left areas outside the city to bear the brunt of the rising waters.

"The Thai government will do everything it can to help reduce the suffering of people from the floods and I hope everyone will join together so that we can get through this difficult time," said Prime Minister Yingluck Shinawatra.

A large volume of water is bearing down on Bangkok, and a seasonal high tide is expected to worsen the situation for the next few days by making it harder for the flood waters to flow out to sea.

From the edge of the capital a vast flood plain stretches north for some 200 kilometers (124 miles), with the ancient city of Ayutthaya and surrounding areas critically waterlogged.

An AFP photographer travelling in a Thai army relief helicopter said the only land visible in some areas are overpasses packed with vehicles and people desperate to reach higher ground.

"It was a sea, with only tree tops and the roofs of houses visible above the water," he said.

People have swapped their cars for boats and improvised rafts and locals in one isolated village swam from their homes to collect air-dropped rations.

In an attempt to speed the flow through waterways towards the Gulf of Thailand, authorities organized around a thousand boats to line up with engines running on the Chao Phraya, Bang Pa Kong and Tha Chin rivers.

Yingluck, speaking from the banks of the Chao Phraya in Nonthaburi province, north of Bangkok, said the boats' propellers would move only a relatively small amount of water but that the measure was still "worthwhile and efficient".

Bangkok Metropolitan Administration (BMA) official Yossak Kongmak said floods would only hit the capital if flooding from the north, high tides and heavy rains acted together.

Thunderstorms and heavy monsoon rains caused minor flooding on roads in the center of the capital over the weekend, but officials remain confident that the main city will be spared serious flooding.

Sandbags have been piled alongside waterways and authorities have been dredging and draining canals to allow more water to flow through.

Homes and businesses in inner Bangkok have been fortified with sandbags in preparation for possible inundation, and many residents have stocked up on food, water and flashlights.

The floods, several meters deep in places, are currently affecting about one third of Thailand's provinces and have left at least 297 people dead.

The United States sent a military transport aircraft from Japan carrying thousands of sandbags and 10 U.S. Marines to assess the situation, the U.S. embassy said.

The floods have dealt a heavy blow to Thailand's economy, disrupting production of cars, electronics and other goods.

Japanese automakers including Toyota have suspended production in the kingdom due to water damage to facilities or a shortage of components.

A fourth major industrial estate has been inundated in Ayutthaya after the floodwalls were breached, prompting an evacuation of employees.