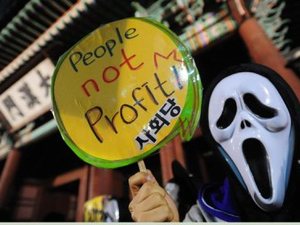 Hundreds camped out in London, Frankfurt and Amsterdam on Sunday after clashes in New York and Rome in worldwide protests seen as the start of a new global movement against corporate greed and budget cuts.

An estimated 500 people spent the night outside St Paul's Cathedral in London's financial district where around 70 tents could be seen.

Some 200 people also camped in front of the European Central Bank building in Frankfurt and 50 tents were seen outside the stock exchange in Amsterdam.

There were rallies in 951 cities in 80 countries around the globe on Saturday in an extension of a campaign born on May 15 with a rally in Madrid's Puerta del Sol square by a group calling itself "Indignados" ("Indignants").

The rallies passed off mostly peacefully but in Rome hundreds of the tens of thousands of protesters set cars alight, smashed up banks and hurled rocks at riot police, who responded by firing tear gas and water cannon jets.

"The Indignados movement rises again with global force," said Spain's El Pais daily. "This is the first time a grassroots initiative organizes so many rallies in so many different and distant places in a coordinated way," it said.

In Italy, La Stampa said: "The world takes to the streets: united, peaceful and colorful." Repubblica columnist Eugenio Scalfari wrote: "The fact is there is now clearly an international movement. Its preface was the 'Arab Spring'.

"It expresses the anger of a generation with no future and no faith in traditional politics but above all financial institutions seen as responsible for the crisis and profiteers of the damage to the common good," he said.

The biggest rallies were in Lisbon, Madrid and Rome, where tens of thousands came out. There were thousands too in Washington and New York.

"I think it is very moving that the movement that was born here has extended throughout the world. It was about time people rise up," said 24-year-old Carmen Martin as she marched towards Puerta del Sol.

Portugal's Publico daily said: "In Portugal, as in the rest of the world, the global agenda of the October 15 rallies combined with a local agenda."

In London, scuffles broke out after a few thousand people gathered in the financial district near St Paul's Cathedral, raising banners saying: "Strike back!" "No cuts!" and "Goldman Sachs is the work of the devil!"

The founder of the Wikileaks whistleblower website Julian Assange joined the rally, telling protesters from the steps of St Paul's that he supported them "because the banking system in London is the recipient of corrupt money."

In Washington, the son of slain civil rights icon Martin Luther King, Jr. told a crowd on the National Mall that his father would have been proud.

"I believe that if my father was alive, he would be right here with all of us involved in this demonstration today," Martin Luther King III said.

Major protests also took place at European Union institutions in Brussels and Frankfurt, as well as in Athens, where painful budget cuts imposed by international lenders in return for a bailout have sparked widespread anger.

In Rome, which saw the worst violence of the day, the march quickly degenerated into street battles between groups of hooded protesters and riot police that sent peaceful demonstrators fleeing with their hands in the air.

"Today is only the beginning. We hope to move forward with a global movement. There are many of us and we want the same things," said protester Andrea Muraro, a 24-year-old engineering student from Padua.

In Canada more than 10,000 blew bubbles, strummed guitars and chanted anti-corporate slogans at peaceful protests in cities across the country.

"I believe a revolution is happening," said 30-year-old Annabell Chapa, who brought her one-year-old son Jaydn along in a stroller to a rally in Toronto.

"They're angry against the world of finance. I understand them," Draghi said at a meeting of G20 financial powers in Paris on Saturday, expressing regret however at the reports of violence.

In the Portuguese capital, where some 50,000 rallied, Mathieu Rego, 25, said: "We are victims of financial speculation and this austerity program is going to ruin us. We have to change this rotten system."

In Mexico, Peru and Chile, thousands also marched to protest what they slammed as an unfair financial system and stagnant unemployment.

As the day began, hundreds rallied in Hong Kong and Tokyo where demonstrators voiced their fury at the Fukushima nuclear accident.