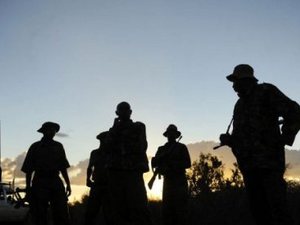 Kenyan troops have crossed the border into war-torn Somalia to attack Islamist Shebab rebels they accuse of being behind several recent kidnappings of foreigners, Kenyan officials said Sunday.

"We have crossed into Somalia in pursuit of the Shehab, who are responsible for the kidnappings and attacks on our country," government spokesman Alfred Matua told AFP.

An AFP reporter close to the border witnessed large numbers of troops as well as military planes and helicopters overhead.

The assault comes a day after Kenya's Internal Security Minister George Saitoti branded Somalia's Al-Qaida-inspired Shebab rebels "the enemy" and vowed to attack them "wherever they will be."

In just over the past month, a British woman and a French woman have been abducted from beach resorts in two separate incidents, dealing a major blow to Kenya's tourism industry.

On Thursday, two female Spanish aid workers were seized from the Dadaab refugee camp, the world's largest and crowded with some 450,000 mainly Somali refugees.

While Kenya has blamed the abductions on the Islamist Shebab, experts say the kidnappings could also be the work of pirates, bandits or opportunistic criminal gangs.

Somalia has had no effective government ever since it plunged into repeated rounds of civil wars beginning in 1991, allowing a flourishing of militia armies, extremist rebels and piracy.