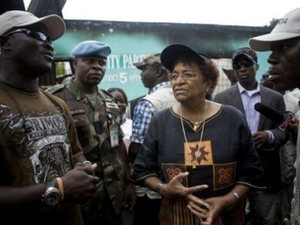 Liberian incumbent Ellen Johnson Sirleaf's party vowed Sunday that she will contest a run-off presidential vote even if the opposition boycotts the polls, fanning fears of new violence in the war-torn west African country.

"If the opposition wants to boycott the process, that will not stop the process," Unity Party campaign director Musa Bility told AFP after the opposition on Saturday rejected as "flawed" provisional results of the October 11 vote placing Sirleaf in the lead.

"For us there will be a second round" between Sirleaf, this year's Nobel Peace Prize co-winner, and former diplomat Winston Tubman of the Congress for Democratic Change, Bility said. "It will be the CDC and the UP."

In a joint statement Saturday, Liberia's nine opposition parties declared the results "null and void," said their agents would withdraw from the National Elections Commission and warned: "If the process continues we will not accept the results."

The statement also claimed there was "a calculated and deliberate act by NEC to rig these elections in favour of President Johnson Sirleaf and the Unity Party."

Sirleaf, 72, was in the lead with nearly 45 percent of the vote, followed by Tubman with 31 percent and former warlord Prince Johnson on 11.2 percent in the latest results from 71 percent of the ballots.

The opposition stance sparked fears of a return to violence in a country still emerging from 14 years of back-to-back civil wars claiming a quarter of a million lives that finally ended in 2003.

The U.N. peacekeeping force MINUL, with some 8,000 troops, stepped up patrols in Monrovia, setting up new barriers and checkpoints in a bid to ward off disturbances ahead of an opposition "mass meeting" on Sunday.

On Saturday, Liberia closed its borders with Ivory Coast, Guinea and Sierra Leone.

The U.N. is particularly concerned over the attitude of Liberian mercenaries who fought in Ivory Coast during the conflict that followed elections there last year. They returned home with their weapons.

Resident Martha Kwee said she and her husband were preparing for the worst. "We are here to buy enough food so that when they start their nonsense we will have enough food in our home," she said at a Monrovia market.

"We are praying for our nation," evangelical pastor Joseph Gbedia told AFP. "We are going through a very, very difficult period of our lives. The statement made by opposition parties is worrisome."

An imam, Mamadi Kamara, said: "The solution to our problems is faith and prayer. What the opposition did yesterday is not a good sign for this nation. We all have to pray."

The election, seen as key to cementing a fragile peace in the country of some four million inhabitants, has won praise from the United Nations and African observers for its peacefulness and high turnout.

The electoral commission has until October 26 to announce the final results of the first round.

If Sirleaf's support stays below 50 percent, she will lack the majority needed to avoid a run-off election on November 8.

Sirleaf was jointly awarded the Nobel Peace prize just days before the first-round vote for her work in rebuilding the country and promoting women's rights.

While initially promising to serve only one term after becoming Africa's first woman president in 2005, the Harvard-educated Sirleaf has asked for more time to continue building the "broken country".