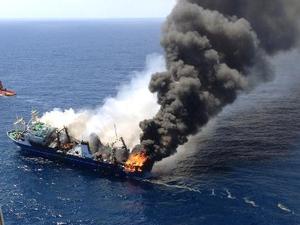 Oil from the wreck of a Russian trawler that sank off the Canary Islands last week has washed up on the beaches of the picturesque tourist islands, Spain said on Friday.

"On Thursday and the morning (of Friday), 200 cubic meters (7,000 cubic feet) of sea water with oil residues were recovered. On the beaches, 200 kilograms (440 pounds) of oil have been removed," the government said in a statement.

Specialists are ready to intervene if more fuel reaches the islands' shores, it added.

The Oleg Neydenov was carrying nearly 1,500 tonnes of fuel oil when it sank on April 15 in an area environmentalists say is home to deep-sea coral and a significant population of dolphins and turtles.

An underwater robot on Tuesday discovered the wreck at a depth of 2,700 metres (8,850 feet), some 15 miles (24 kilometres) off the southern coast of Gran Canaria island.

Bad weather has since prevented the authorities from plugging the leak and Greenpeace said the oil slick has extended for over 100 kilometres.

Spain said two turtles and seven birds were being treated after being found covered in oil.

The Canary Islands, off the coast of northwest Africa, are a tourist hotspot, welcoming some 10 million visitors a year.