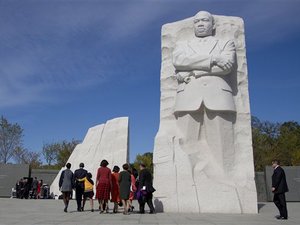 "When met with hardship, when confronting disappointment, Dr. King refused to accept what he called the 'is-ness' of today. He kept pushing towards the ought-ness of tomorrow,'" Obama told a crowd of thousands.

When "rebuilding an economy that can compete on a global stage, fixing our schools so that every child, not just some, but every child gets a world-class education, making sure that our health care system is affordable and accessible to all.... let us not be trapped by what is," Obama told the crowd gathered to dedicate a monument to the civil rights legend.

The U.S. president made his remarks with the country mired in squabbles with Congress over budget reform, reviving the stalled US economy, and a host of other issues.

His address was delivered after touring the towering monument with First Lady Michelle Obama and his daughters Sasha and Malia, strolling leisurely around the statue of King.

A massive, 28-foot (nearly nine-meter) "Stone of Hope" statue in the likeness of King, carved out of white granite, shows him gazing sternly out onto the horizon, arms folded.

In his address, Obama paid tribute to "Dr King's moral imagination," thanks to which he said "barricades began to fall and bigotry began to fade."

But he said seeing such visions through requires tenacity.

"We can't be discouraged by what is. We've got to keep pushing for what ought to be, the America we ought to leave to our children, mindful that the hardships we face are nothing compared to those Dr. King and his fellow marchers faced 50 years ago," he said.

"If we maintain our faith in ourselves and in the possibilities of this nation, there is no challenge we cannot surmount," said Obama, America's first black president, as he paid tribute to the King, a crusader for African-American rights.

The president noted that when faced with setbacks, King "didn't say this was a failure, this is too hard, let's settle for what we got and let's go home."

"Instead, he said let's take those victories and broaden our mission to achieve not just civil and political equality but also economic justice. Let's fight for a living wage and beer schools and jobs for all who are willing to work."

The ceremony was attended by celebrities including soul legend Aretha Franklin, who stirred the crowd with a rendition of the gospel anthem "Precious Lord," one of her signature songs.

Soul singer Stevie Wonder concluded the ceremony, offering a version of his tribute song to Luther King, "Happy Birthday," written as part of a success campaign decades ago to stir up public support for a national holiday in the slain civil rights icon's honor.