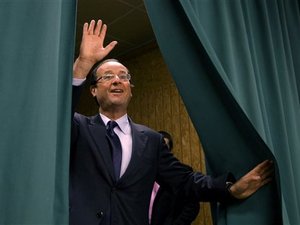 French Socialist lawmaker Francois Hollande was crowned favorite for next year's presidential election on Sunday, winning the left's primary to choose a challenger for Nicolas Sarkozy.

The center-right incumbent is expected to stand for re-election, but all recent opinion polls show him on course to lose to any left-wing challenger, and Hollande's victory will serve as a springboard for his campaign.

With almost two million of an estimated 2.8 million votes counted, Hollande had an unassailable 56 to 43 percent lead over Socialist leader Martine Aubry, who conceded defeat and vowed to support his campaign.

The vote was France's first U.S.-style open primary -- any elector who said he or she supports the ideals of the left could vote -- and the huge turnout was hailed by Socialist leaders as a boost for the battle ahead.

"Tonight, we rally behind our candidate," Aubry declared, preparing to welcome her erstwhile opponent to Socialist Party headquarters to celebrate his victory and make a speech designed to re-unite and motivate activists.

Segolene Royal, who is both Hollande's former partner and the Socialist's defeated candidate in the 2007 election, said the win was both an "undeniable advance" and showed supporters' "very strong trust" in the victor.

Hollande had the backing of the four defeated first-round candidates and entered the run-off as favorite, but Aubry mounted a tough fight back, branding him a soft centrist without the steel to defeat Sarkozy.

But 57-year-old Hollande turned the attacks to his advantage, accusing Aubry of undermining party unity and suggesting his lack of a track record would make it easier for him to run as a candidate of change.

Sarkozy's camp was wrong-footed by the primary. Some of his supporters grudgingly admitted it served as a good shop window for the Socialists, but the president himself dismissed it as alien to French political tradition.

The majority UMP mocked the left's policy debate, portraying it as a throw-back to the 1980s, but televised confrontations drew large audiences.

The right had hoped the primary format would sow discord between the six hopefuls, triggering the infighting for which the Socialist Party is infamous.

In fact, the first round remained relatively civil, despite a history of personal animosity between the frontrunners.

Aubry succeeded Hollande as Socialist Party general secretary and has since let it be known that she found the organization in a sorry state.

Hollande was the partner of fourth-placed challenger Royal for 30 years, raising four children with her, but split from her secretly before her failed presidential and moved in with his girlfriend.

Despite the bad blood, the campaign only turned truly bitter in the closing straight, when Aubry attempted to close down Hollande's narrow but consistent lead by tacking to the left and branding him weak.

Historically, both she and Hollande come from the party centre ground.

In 1995, when France's last Socialist president Francois Mitterrand left office, they were both apostles of modernizing former European Commission chairman Jacques Delors -- Aubry is his daughter, Hollande his protege.

Even before the result was confirmed, Jean-Francois Cope, leader of Sarkozy's UMP warned: "This evening we'll have an opponent, and we'll finally be able to demand some answers."

Socialism is why the EU is in so much trouble. More socialism will not help. French people if you want real change vote nationalism, vote Le Pen......get rid of the New World Order based on world communo-social-fascism.