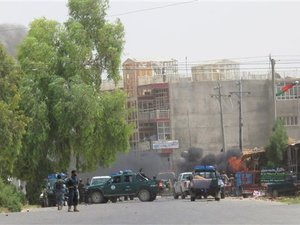 A suicide bomber targeted a provincial head of Afghanistan's intelligence agency on Monday, wounding the spy and killing a child in the increasingly volatile north of the country.

The bomber detonated next to a car carrying the National Directorate of Security (NDS) official at 8:20 am (03:50 GMT) in Maymanah in Faryab province, Lal Mohammad, police spokesman for the northern region, told Agence France Presse.

"The chief of NDS was going to his office when the attacker, a person wearing a suicide vest, detonated near his car.

"One child is killed and six other people, including the provincial chief of NDS, are injured," said Mohammad.

The Taliban could not be reached for comment immediately, but the militia has stepped up targeted assassinations as part of its 10-year insurgency designed to evict U.S.-led foreign troops and their allied government in Kabul.

Attacks in the Afghan capital and high-profile political assassinations over the summer have fed perceptions that a decade after the 2001 U.S.-led invasion, the West is losing the war in Afghanistan.

But in the decade of fighting, Afghanistan's north has been relatively quiet compared to the Taliban heartland in the south.

"A suicide bomber targeted the head of the NDS. He's injured with five other people. One civilian is killed," said Faryab police chief Sayed Ahmad Sameh.

In the west, five Afghan soldiers were killed and three others wounded in a Taliban ambush on Saturday, said defense ministry spokesman Zahir Azimi.

He said another soldier was missing after the attack in the Bakwa district of Farah province.

International troops have started to withdraw from Afghanistan ahead of a 2014 deadline for foreign combat soldiers to leave, although coalition forces will remain to train up Afghan national security forces.

But there is concern about the ability of Afghanistan's army and police to protect their country against the Taliban-led insurgency.

The north of Afghanistan, dominated by ethnic Tajiks and Uzbeks, has traditionally been more secure than the south and east, but an increase in attacks has raised fears about stability.

On Saturday, two men were killed at a U.S.-run development base in the first suicide attack since 2001 in the northern and Tajik-dominated Panjshir province, which is bitterly opposed to the Taliban.

Some Tajiks have stepped up calls on the government to abandon peace efforts with the Pashtun-dominated Taliban after one of their leaders, peace broker Burhanuddin Rabbani, was assassinated in Kabul on September 20.

The United Nations says violence is up by nearly 40 percent on last year with an average of 2,108 incidents a month in the first eight months of 2011.

A report to the U.N. Security Council showed that the number of civilians killed over the summer rose five percent compared to the same period in 2010.

But last week, an officer in the U.S.-led NATO military said the number of Taliban attacks in the country had declined for the first time.

Overall insurgent attacks are down in the past two months compared to last year and the Taliban have failed to seize back territory lost in the south, said deputy chief of staff Major General Michael Krause.