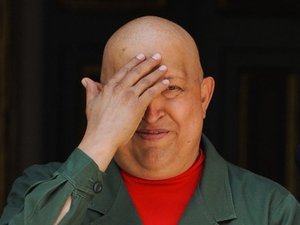 Venezuelan President Hugo Chavez left for Cuba on Sunday for what he said would be a thorough medical exam after undergoing multiple rounds of chemotherapy in his battle with cancer.

In brief remarks before departing for Havana, Chavez told official VTV television that the visit was to "continue a process we have been following for about four months," but did not reveal further details of his health.

The firebrand leftist leader had previously said he would have a checkup in Cuba to confirm there are no malignant cells in his body, and vowed to inform the Venezuelan people of the results of the "rigorous" tests.

"I have great faith in what we are going to do in Cuba tomorrow, and that it will be as successful as my successful surgery, post-op treatment and chemotherapy," he said.

The 57-year-old president said he would be in constant contact with his vice president, ministers and top military brass during his stay in Havana, adding that he would likely be home by "mid-week".

Chavez has undergone four rounds of chemotherapy since an operation in June, three of them in Cuba, but little information have been provided about the nature of the cancer, raising uncertainties about the state of his health.

Officials have said a tumor was removed from the president's "pelvic area" but have provided no other details.

Chavez has been forced to cut back his work schedule and public appearances.

Chavez, in power since 1999, has maintained that he will recover in time to win re-election in 2012.

Maybe this is some sort of divine justice for supporting Assad, Qaddafi, Castro and so on.