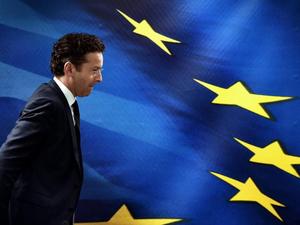 A new Greek expert team, tasked with negotiating with the country's creditors, met Tuesday to draw up a series of reforms aimed at finally reaching a deal with the EU and the IMF.

The "political negotiation team" of experts, led by the Dutch-born economics professor and junior foreign minister Euclid Tsakalotos, met late in the evening "to devise reform proposals," the finance ministry said in a statement.

Greece needs to be realistic when negotiating debt relief, Eurogroup chief Jeroen Dijsselbloem cautioned earlier Tuesday, as Athens runs out of time and money to settle a deal.

The reality is that "there's little money and besides, unaided, Greece at the moment won't pull through," said Dijsselbloem.

Athens is looking for a compromise deal with its creditors after two months of fruitless negotiations.

Among the reforms which Greece's hard-left, austerity-averse government could be prepared to adopt, according to the press, is a reinforced tax collection system, tackling the black market in fuel, taxing television adverts and ramping up taxes on luxury goods.

These measures are expected to be presented at a meeting Wednesday with the so-called Brussels group, which is in charge of the negotiations on Greek's debt.

Greece's government felt the need to reshuffle its EU-IMF negotiating team, giving the moderate Tsakalotos a key role to keep a close eye on the talks that have made little progress under maverick Finance Minister Yanis Varoufakis, who will still have oversight of the negotiating team.

Greece has been trying to negotiate a deal that would unlock the last 7.2 billion euros ($7.8 billion) in remaining EU-IMF bailout money that the debt-ridden country needs to avoid default and a possible exit from the euro.

But the Syriza-led government, elected in January on an anti-austerity ticket, has resisted pressure to continue with a policy of cuts in return for the cash.

So far the acrimonious talks have seen little progress over the last two months and sometimes "even went backwards", said Dijsselbloem.

Greek Prime Minister Alexis Tsipras said Tuesday he was confident a deal could be reached by early May.

"Our goal... is to reach a first agreement this week if possible, or next week at the latest," Tsipras said in an  interview with Greece's Star TV.

Tsipras said that if his government was pressured by Greece's creditors into a deal conflicting with its electoral programme, he would put the issue to a referendum.

Dijsselbloem however said a referendum "will cost money and create great political uncertainty."

"I don't think we have the time, neither do the Greeks have time," he added.