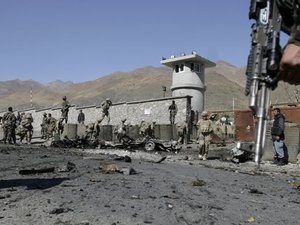 Afghan security forces are showing "significant progress" with a swell of new recruits and better training, NATO's head of training said Monday before leaving his post.

Lieutenant General William Caldwell said he was optimistic about the country's ability to "sustain the force we've built them... over the long term" after NATO troops hand over security responsibility to Afghan forces by the end of 2014.

His upbeat assessment comes in stark contrast to widespread fears over the ability of the army and police to protect the country.

A decade into the war, U.S. troops on the ground complain that Afghan forces are still over-reliant on them and fail to take initiative.

But Caldwell said there are now 306,000 Afghan security personnel, exceeding the recruitment target for this year, with 50,000 officers and non-commissioned officers hired, standardized training and better equipment and weapons.

"Two years ago there were real reasons to be skeptical," he said.

"Today we see (a national force) being trained and equipped, which is developing the leaders and the people with the right vocational skills, and the institutions and systems to make this an enduring force."

Better pay and literacy programs had also been integrated into the national forces, he said, addressing two key issues within the ranks.

The Afghan army and police have grown rapidly from around 190,000 personnel in late 2009, when the current program to train them began.

Around $2.7 billion worth of vehicles, weapons, communications equipment and aircraft are being provided to Afghan forces between August this year and March 2012, a surge in equipment provision which is part of the overall spending.