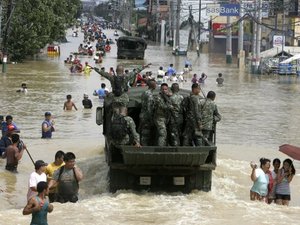 About 3,000 U.S. and Filipino marines started two weeks of annual military drills in the Philippines on Monday that will include a hostile beach assault exercise near the disputed Spratly Islands.

U.S. Marine 1st Lt. Nick Eisenbeiser said the Oct. 17-28 maneuvers would focus on honing their joint capability to ensure regional security and were not aimed at China or any country as an imaginary target.

"They shouldn't get worried," Eisenbeiser told The Associated Press, when asked if the exercises were aimed at China, whose growing naval power has set off concerns in the region. "We're assisting the Chinese in ensuring that their region is peaceful."

The exercises would ensure that U.S. and Philippine forces could jointly respond to "anything that arises," he said.

The United States irked Beijing last year by asserting that Washington had a national security interest in the peaceful resolution of the disputes over the Spratly Islands.

The potentially oil-rich islands are located in the South China Sea, between Vietnam, the Philippines and Malaysia, and straddle some of the world's busiest sea lanes.

China seeks to resolve the disputes through bilateral talks with five other claimants, including the Philippines. Beijing has rejected any U.S. role in the resolution of the disputes over the islands.

Philippine military spokeswoman 1st Lt. Cherryl Tindog said an Oct. 27 drill will involve a mock raid by about 100 U.S. and Filipino marines from an American warship to capture a hostile beachhead west of Palawan province, which faces the South China Sea.

Other events include a live-fire exercise in Crow Valley in Tarlac province, north of Manila, and medical missions and school constructions in several Philippine towns.

One Filipino-occupied island was proposed as a possible site for joint training but was ruled out to avoid antagonizing China and other claimants. The island lies close to a Spratly reef occupied by Chinese forces and an island separately occupied by Vietnamese forces.

Philippine marine Brig. Gen. Eugenio Clemen said the exercises with U.S. forces would be confined to the country's territory so "nobody could question that."

The Philippines and Vietnam, another Spratlys claimant, have separately accused Chinese vessels of intruding into what they say is their part of the contested areas and of disrupting oil explorations in their territorial waters this year.

Both countries have since discussed those allegations with China and renewed calls for the peaceful resolution of the disputes, easing monthslong tensions.