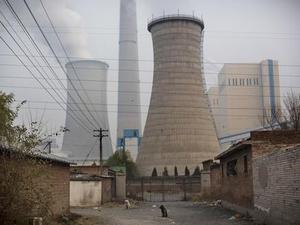 China’s recent scrapping of small coal plants will avoid the release of as much as 11.4 million metric tons annually of climate-warming carbon dioxide, helping the country cut emissions for the first time in more than a decade.

The impact is a sign of what’s to come as China pushes for a cap on coal and moves to shutter, or refit, its dirtiest coal-burning power plants. China overhauled or scrapped as much as 3.3 gigawatts of the facilities in 2014, according to a March statement from the National Bureau of Statistics.

The reduction in greenhouse gases assumes most of the capacity was retired because it doesn’t meet current standards and estimates that the plants annually used 5.2 million tons of coal, producing 2.2 million tons of carbon emissions per million ton of coal, according to estimates from Sophie Lu, a Beijing-based analyst from Bloomberg New Energy Finance.

“China has tightened environmental protection and has taken measures to close small plants that don’t meet the standards for the environment and replaced them with less-polluting bigger plants,” said Sun Weifeng, a Shanghai-based analyst from Yuanta Securities HK Co. “This may not have a significant impact in the short term but will be very meaningful in the long run.”

The volume of carbon dioxide that would have entered the atmosphere had the plants remained operating represents about 2 percent of the emissions produced annually by Australia, which World Bank data show emits almost three times as much climate-warming gases as China on a per capita basis. Australia produced 554.6 million tons of greenhouse gases in 2012, according to that country’s Department of the Environment.

“Carbon emissions could still be growing in the years to come but at a decreasing rate,” BNEF’s Lu said.

The closures are part of China’s plans to close as much as 20 gigawatts of capacity that doesn’t meet environmental standards in the five years ending in December. China has already shut 18 gigawatts, according to Greenpeace.

An historic agreement announced in November between the U.S. and China added urgency to the Asian nation’s efforts to combat air pollution. Under the deal, China President Xi Jinping promised his country’s CO2 pollution would peak around 2030.

China is expected to close another 60 gigawatts with facilities that are more efficient between 2016 to 2020, though three times as many plants are scheduled to be built using newer technology, BNEF’s Lu said. New plants will produce about 90 percent fewer pollutants such as dust and sulfur dioxide per kilowatt-hour of electricity generated, she said.

Better efficiency at power plants, slower growth in demand, and more generation from renewables, gas and nuclear reactors are some of the other reasons China is using less coal to produce its power, said Lauri Myllyvirta, an energy analyst at Greenpeace East Asia.

“More than half of the total reduction in coal consumption came from the power sector,” Myllyvirta said.

China’s emissions of carbon dioxide fell last year for the first time in more than 10 years, according to a Bloomberg New Energy Finance estimate based on preliminary energy demand data from China’s National Bureau of Statistics.

Coal consumption from key power plants dropped 7.4 percent to 1.25 billion tons last year, compared with the previous year, according to data from the China Electricity Council.

A decline in the amount of coal burned, rather than the efficiency of power plants, may be the biggest determinant in how much carbon is emitted, Lu said.