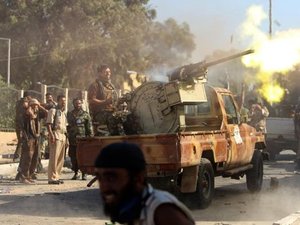 Libyan fighters raised the new government's flag over the oasis of Bani Walid Monday and hoped for the swift fall of the other remaining redoubt of Moammar Gadhafi loyalists, Sirte, as relatives of his henchmen fled.

Cries of Allahu Akhbar (God is Greatest) and bursts of celebratory machinegun fire filled the desert air over the centre of Bani Walid, as the new regime troops feted their capture of the loyalist bastion after a six-week siege.

"The city of Bani Walid has been completely liberated," said Saif al-Lasi, a commander of the Zliten Brigade, one of the National Transitional Council units which took part in the final assault launched on Sunday.

The overall commander of NTC forces in the city, Musa Yunis, said all resistance from loyalist forces had now ceased.

"Kadhafi's troops left their vehicles behind and even changed into civilian clothing so they would be hard to find," he said.

"There is no resistance in Bani Walid anymore. Most of Gadhafi's troops have fled, and those who remain are not causing problems."

The desert region's Warfala tribe was a major recruiting ground for elite units of Gadhafi's regime and devotion to the fugitive strongman runs deep.

The new regime troops had launched a pincer attack, with columns advancing from north and south which met in the city centre capturing the castle at the heart of the sprawling oasis.

The jubilant fighters hoisted the red, black and green flag of the new government over mosques and other buildings, tearing down the all-green emblem of the ousted regime, an AFP correspondent reported.

The fall of Bani Walid means that Gadhafi loyalists are now restricted to just one tiny enclave in the fugitive strongman's hometown Sirte.

NTC fighters, who have laid siege to his loyalists in the Mediterranean coastal city for more than a month, took heart on Monday from the flight of several relatives of leading Gadhafi regime officials.

Among the escaping civilians were the mother and a brother of Moammar Gadhafi's spokesman Mussa Ibrahim, a senior NTC commander said.

"These are families of regime officials. There is Mussa Ibrahim's mother and brother among them," said Wessam bin Hamaidi, gesturing at seven cars loaded with men, women and children fleeing the battleground neighborhoods.

Bin Hamaidi, in charge of military operations in Sirte's eastern front, said the passengers included other "wanted" people but "no big fish," adding there were fighters mixed in with the fleeing civilians.

"Our strategy of surrounding the neighborhoods is working as you can see families of regime officials are coming out," he said.

Hassan al-Droe, an NTC representative from Sirte, told AFP that relatives of Gadhafi regime officials started fleeing in the morning from the Dollar and Number Two neighborhoods, where diehard loyalists are holed up.

"This morning a lot of families from the regime left the two neighborhoods in 20 cars," Droe said, adding that the passengers included men, women and children.

"They told us that Mutassim is inside," he added in reference to Gadhafi's son and national security chief.

As NTC fighters shuttled back and forth to the front line and surrounded the contested neighborhoods, Droe said it was only a matter of time before they took control of the last two pockets of resistance in Sirte.

"The way the families came out has raised hope that we will capture the neighborhoods very soon," he said, as machinegun and mortar fire rocked the area.

Bin Hamaidi said that intelligence gathered from captured pro-Gadhafi fighters had enabled the besieging NTC forces to target what they believed was the loyalists' operations room in what is now their last enclave in Libya.

"Some people who we captured this morning gave us some information that one of the buildings in the Number Two neighborhood was being used as an operations centre for the Gadhafi forces.

"So we used the tanks to hit the operations centre," he said.

An AFP correspondent saw two tanks moving along the Mediterranean shoreline from the east to fire at Gadhafi positions from the seaward side.

NTC forces control the entire waterfront and the loyalist forces in the two neighborhoods just inland are completely surrounded.

Sirte is a key goal for the NTC, which has said it will not proclaim Libya's liberation and begin preparing for the transition to an elected government until the city is completely under its control.

On a lightning visit to Tripoli on Monday to reopen the British embassy, Foreign Secretary William Hague paid tribute to the NTC fighters, saying that the world had consistently underestimated their military ability.

Hague said it was now vital that the myriad of regional militias that had brought an end to Gadhafi's 42 years of iron-fisted rule be turned into a cohesive regular army.

"It is important for the militias to be integrated into the work of the National Transitional Council, and then of course into the national transitional government that will be formed once the liberation of the country is declared," Hague told reporters in the Libyan capital.

He said the task of bringing together "so many different groups" that contributed to the revolution was a key challenge, and pledged 20 million pounds ($32 million) for Libya's stabilization fund and another 20 million pounds to support political and economic reform.