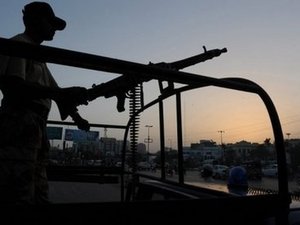 About 30 gunmen armed with mortar shells and rifles ambushed the paramilitaries in the Bara district of Khyber, part of the lawless tribal belt on the Afghan border used by NATO troops to truck supplies into Afghanistan.

"It was an ambush in the afternoon. It continued for two to three hours, and there have been casualties in the ambush. There have been killings of the terrorists as well," military spokesman Major General Athar Abbas told Agence France Presse.

Other officials said nine troops from the Frontier Corps paramilitary were killed and three others wounded in the attack not far from Peshawar, while at least 14 militants were killed.

Ambushes on such a deadly scale are rare, underscoring the pernicious Taliban insurgency plaguing the tribal areas and the challenges facing Pakistan in containing the unrest while under US pressure to eradicate Islamist militants.

Peshawar is the main city in northwest Pakistan and a gateway to the semi-autonomous tribal areas on the Afghan border that Washington calls a haven for militants fighting in Afghanistan and a global headquarters of Al-Qaeda.

Khyber straddles the main land route for NATO supplies shipped to Pakistan's port city of Karachi and driven across the border into Afghanistan.

"The militants attacked FC troops during a search operation. They came under attack from a small hill where militants were hiding," the political agent of Khyber, Rehan Gul Khattak, told AFP.

"The attack was mounted by around 30 militants. They used mortar shells and Kalashnikov rifles and other small weapons. The attack damaged several FC vehicles, including a jeep which was totally destroyed."

"Fourteen militants have been killed and nine soldiers embraced martyrdom during an encounter in Akakhel," a military spokesman told AFP.

The United States wants Pakistan to open an offensive in North Waziristan, considered the premier insurgent bastion in the tribal belt and where leaders in the Al-Qaeda-linked Haqqani network are based.

It says eliminating militant sanctuaries in Pakistan's tribal belt are vital to ending the 10-year war in Afghanistan and defeating Al-Qaeda.

But Pakistan has refused to open a new military front, arguing its troops are too overstretched, leaving American options largely limited to US drone strikes, of which more than 50 have been reported so far this year.

Nearly 4,700 people have been killed across Pakistan in attacks blamed on Taliban and Al-Qaeda-linked militants based in the northwestern tribal belt since government troops stormed a radical mosque in Islamabad in 2007.

Around 3,000 Pakistani soldiers have also lost their lives in attacks since 2001 when the country joined the war on terror.

Elsewhere in the northwest, gunmen shot dead the head of a pro-government tribal militia, raised to fight the Taliban, and four of his associates in the district of Kohat on Monday, police said.

Two men riding on a motorbike sprayed bullets on the car of tribal elder Azizur Rehman, who headed a militia in the tribal district of Orakzai, local police chief Mubarak Zaib told AFP.

Rehman, 45, died along with his four associates, he added.

On Monday, the UN refugee agency confirmed that 4,000 tribesmen who fled a military operation in Mohmand, another of the seven districts in the tribal belt, had returned home, with the military saying calm had been restored.

The Nahqi camp, where the people had been staying, closed last week and all the families left voluntarily, UNHCR official Tim Irwin told AFP.

It had been established after conflict broke out in the tribal district of Mohmand, which lies on the Afghan border, in January, he said.

But although the military has claimed victory in a number of battles against militants, attacks have continued across the country.

UNHCR says more than 350,000 people displaced by conflict in the tribal belt are still living in host communities in the northwest.