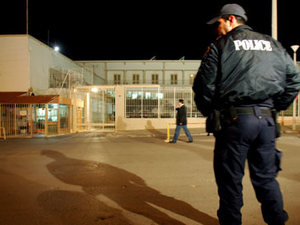 Two inmates were killed and 21 others injured during fighting that broke out in an Athens prison on Sunday, the justice ministry said.

The violence erupted between Albanian and Pakistani groups of prisoners using improvised weapons in Korydallos prison in western Athens, said a source close to the investigation. The reason for the dispute was unclear.

Eight of the injured were said to be in serious condition, and several ambulances could be seen in front of the prison after the incident.

By 8:00 pm (1900 GMT), prison guards appeared to be back in control, conducting body searches on inmates returning to their cells.

The overcrowded Korydallos prison houses a wide array of inmates, ranging from common criminals to anarchists and corrupt politicians.

Korydallos also has a specially-built courtroom that hears cases that have a political nature. On Thursday, Greek neo-Nazi party Golden Dawn leaders will be tried in the prison courtroom.