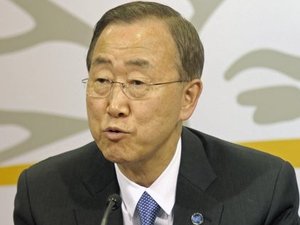 "I am urging them to resolve all the pending issues, it is unacceptable that the borders are blocked," said Ban in Bern.

"It is a many-year conflict, a political historic issue, but they have to discuss through dialogue."

A trade row spilled over into violence late July when Pristina ordered its security forces to take over two border crossings to Serbia to enforce a newly imposed ban on Serbian goods.

The ethnic Albanian Kosovo government said the ban was being ignored by ethnic Serb members of Kosovo's border police.

Serbs in northern Kosovo reacted angrily and an ethnic Albanian police officer was killed and four injured in ensuing clashes.

NATO troops stepped in when the Jarinje border post was set on fire and bulldozed, apparently by ethnic Serbs.

Local Serbs have for weeks been manning 16 barricades blocking the main access roads to the border gates.

NATO has set a Tuesday deadline for the local Serbs to remove the barricades, saying that troops would step in by Tuesday if the roadblocks were not cleared voluntarily.

Meanwhile, Serbia's deputy prime minister Ivica Dacic in an interview published Sunday said the borders between the two countries need to be redrawn if the Belgrade-Pristina dispute is to be solved peacefully.