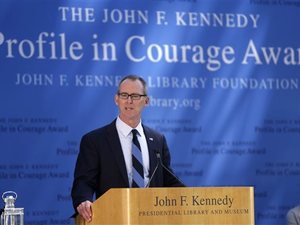 Republican Bob Inglis received the John F. Kennedy Profile in Courage Award on Sunday for reversing his position on climate change despite the predictable political fallout that helped cost him his seat in Congress.

Kennedy's grandson, Jack Schlossberg, presented the award to Inglis on Sunday at the JFK Library in Boston.

"My grandfather's legacy is kept alive by Bob's courageous decision to sacrifice his political career to demand action on the issue that will shape life on Earth for generations to come," said Schlossberg, son of Caroline Kennedy and Edwin Schlossberg.

Inglis, a member of the House of Representatives Science Committee and ranking member of its Energy and Environment Subcommittee, had opposed legislation on climate change, but said he changed his mind after briefings from scientists and encouragement from his five children.

He advocated for a carbon tax to reduce dependence on fossil fuels, and was defeated in a 2010 primary challenge for re-election to the South Carolina seat he had held twice, from 1993-1998 and 2005-2010.

"When is America going to rise to the challenge on climate? Well, I think it's soon. I think it's before the decade is out," Inglis said in remarks for the ceremony, an allusion to JFK's 1960s call to send astronauts to the moon.

"I think we're going to come together and get this done because I believe that a pricing of carbon dioxide will be like someone said of the financial crisis, 'It's amazing how the impossible went to the inevitable without ever passing through the probable,'" Inglis said.