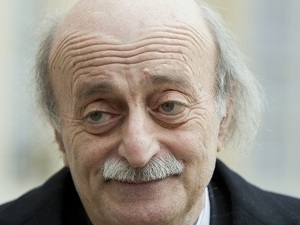 Progressive Socialist Party leader MP Walid Jumblat began on Monday his testimony at the Special Tribunal for Lebanon that is examining the assassination of former Prime Minister Rafik Hariri by recounting the nature of the ties between Lebanon and Syria, particularly with the ruling Assad family.

He told the trial chamber: “Bashar Assad showed hostility towards Rafik Hariri before he was elected president.”

Jumblat said that he had met Assad twice prior to his election as Syrian president in 2000.

He noted his animosity towards Hariri during the second meeting, which was held in Damascus in 1999.

“It was not a comfortable meeting and he focused his questions on Hariri. Evidence of his hostility towards him was clear in this meeting,” revealed Jumblat.

On Assad, he stated: “Sometimes, you can understand a person simply from a single meeting. I became aware that we in Lebanon would be faced with a hurdle with the arrival as Assad as president.”

Commenting on his first meeting with Assad, Jumblat recalled that it was held in Lebanon and attended by then head of Syrian Intelligence in Lebanon Ghazi Kanaan.

“The meeting was an introductory one and we talked about silly matters,” noted Jumblat.

“Kanaan told me after the meeting however that 'I should be aware of who the Assad family is.' I did not make much of this comment at the time, but I recalled it a few years later with the forced suicide of Kanaan” in 2005, continued the PSP leader.

Speculation surrounded the Syrian official's death, with some claiming that he was in fact killed by the Syrian regime due to information he possessed over Hariri's 2005 assassination.

Addressing the election of Emile Lahoud as president, Jumblat revealed that he, along with Hariri and then President Elias Hrawi, sought in 1995 to delay his election due to his close ties with the Syrian regime.

Lahoud was elected president in 1998.

The MP told the court that he opposed Lahoud's election as president because of his military background and “complete affiliation with the Syrian regime.”

“The president and prime minister in Lebanon had no control over the Lebanese army, which was under the command of Lahoud. The army answered to Syria,” he said.

“We wanted a president who had some room to maneuver in order to implement the Taef Accord,” he added.

“Hafez and Bashar Assad were friends with Lahoud and we sensed that the security grip over Lebanon was tightening,” remarked the MP.

“Ties with Syria were aimed at confronting the Israeli threat and implementing the Taef Accord. I sought with Hariri and Hrawi to allow Lebanon to control its fate, but the Syrian security apparatus thwarted our efforts,” Jumblat stated.

“In 1998, a Syrian order was made to elect Lahoud as president. Lebanese officials were summoned to the headquarters of the Syrian intelligence in Lebanon where they were ordered to fulfill their demands. Very few people had the courage to oppose them,” he explained.

“The implementation of the will of the Syrian president is done through the Syrian security apparatus in Lebanon and the Lebanese security agencies that were affiliated to it,” he added.

On the build up to the extension of Lahoud's term in September 2004, Jumblat recounted how he held a meeting with head of Syrian Intelligence in Lebanon Rustom Ghazaleh in August during which he informed him of his opposition to the proposal.

Ghazaleh responded to the MP that “you are either with us of against us,” said Jumblat.

“After expressing my refusal, Ghazaleh informed Assad and Lahoud, who each canceled meetings I had scheduled with them,” he stated.

Jumblat interpreted these developments as a sign of Assad's hostility to him and later Hariri.

“Hariri and I agreed to reject the extension of Lahoud's term, but we each had our own way of executing this decision,” he continued.

Asked about his ties with Ghazaleh, Jumblat tersely replied: “We were not on friendly terms.”

The STL Prosecution then addressed the August 2004 meeting held between Hariri and Assad in Damascus.

Jumblat said that the meeting “was very brief and the premier and the accompanying delegation were not invited to take a seat.”

Assad informed Hariri to accept the extension of Lahoud term, noted the MP.

“Hariri was told by Assad that 'I am Lahoud and Lahoud is me,'” revealed the PSP chief.

“The Syrian president also informed Hariri that 'if French President Jacques Chirac seeks to remove Syrian troops from Lebanon, then he will break Lebanon on his head,'” he continued.

“Assad also told Hariri that 'Jumblat is mistaken if he believes that he controls all of the Druze. I have Druze of my own,'” he was quoted as saying by the PSP chief.

“Hariri left the meeting in Damascus and returned to Lebanon were we met at my Clemenceau residence,” recalled Jumblat.

“Hariri was very concerned and shaken,” he added.

“I concluded Assad's statements to be a political and physical threat to Hariri. I therefore persuaded him to accept the extension for his own safety because I know what the Syrian regime is capable of,” he stressed.

“I refused to vote for the extension, but told Hariri to vote for it for his safety,” he told the court.

“Despite the threat against me by Syria, I chose to oppose the extension because it was time for the rise of a free and independent Lebanon,” Jumblat remarked.

“I was forced to make a choice and I chose to reject the extension. My conscience is clear,” he stressed.

“Assad directly threatened Hariri because the Syrians knew that had he and I rejected the extension at parliament, it would not have passed,” he explained.

“For the Democratic Gathering, the extension presented a new phase for us. It was marked by new political alliances. We sought to create the largest front to confront the forced extension,” he added.

The Prosecution then focused its cross-examination on United Nations Security Council Resolution 1559 that was issued in August 2004.

Jumblat said: “The resolution was linked to the extension. Hariri was later accused of being behind the resolution, but it was in fact out of the hands of the Lebanese.”

“Hariri and I later rejected the resolution and repeatedly called for the implementation of the Taef Accord,” he stressed.

“The resolution would not have been issued had it not been for the extension of Lahoud's term,” he stated.

Jumblat will continue his testimony on Tuesday.

Hariri was killed in a massive bombing in Beirut on February 14, 2005.

The STL was set up to examine the assassination.

Five Hizbullah members have so far been indicted.

The tribunal kicked off its proceedings in 2014, listening to various witness accounts, including those of prominent lawmakers and journalists.

The political testimonies are focusing on Hariri's ties with the Syrian leadership and the influence the Syrian regime wielded over Lebanon.

Junblatt will not disclose all he knows. He mentioned he would not a few months ago.

Thanks but no thanks, I dont want anything from a hasbara troll.

How come the U.S don't want to send satellite images from the incident of Hariris death?

Because they don't want to provide evidence, just accusations without proof, like we have heard from you March 14 parrots since 2005.

And why is Ghazi Kanaan dead again?? Perhaps because he had evidence (or accusations without proof??) and he killed himself??? Looooool

Lets hope he spills the beans as surely he knows this is the time to come clean and call a spade for what it truly is. All roads will eventually lead to Rome and I dont believe there will be many new surprises they have already accused 4 members of Kizb of being involved in the murder, its obvious who leads them in Lebanon and Syria and they will eventually get accused. Their sheep will be quick to come up with the usual it was not us its the Jews and Imberialiyi etc...

yes Ft, yes... and Hamade is demented, and Senioura a thief, and May Chidiac a lunatic, etc etc... good Boy Ft...we know the tune...

Exactly thanks for proving what I just said Southern already the court is non binding in the eyes of Iran. Insecurity is tough on the guilty conciseness?

The Syrians with the support of Iran killed everyone who opposed or threatened the Iranian plan for Lebanon. No matter what comes out of the STL, Lebanon is under the full control of Iran via HA and unfortunately nothing could be done about it.

They do not like to admit that as it reflects the lack of leadership they have. Instead they claim they are not in power and the fault of everything around them is either Israel or KSA. This is a clear lack of responsibility in the Clown/Kizb circus and it works as their supporters are not that smart and never question this approach instead bow and feed on the short grass.

Either live with it or leave I guess. The only way out of that dilemma is the total distraction of Iran which will never happen under the weak Obama

Prior to lahoud, Hrawi allowed Hariri and Jumblat to do what they want. When Lahoud became president, he kicked the Jumblat out of beitdine.

Hariri and Jumblat supported Assad until the last day of Hariri's assassination. Even after Hariri's assassination, you still had the BIG FOUR running Lebanon (Hariri, Jumblat, HA, Amal). If they did not like Lahoud and Assad forcefully wanted him, why didn't they resign or join with qornet Shahwen? This political propaganda does nothing...

The show must go on? How many more years?

"the truth about Iran and its protection of Israel"????? Iran is protecting Israel from Who??? The GCC who have spent tens of billions of dollars in waging wars against the Arab world while they will not spend a penny to help resist Israeli "genocide"???

Note: have you noticed who is killing all those people? off course you will abide to the standard response and claim the IDF and the GGC and possibly somalia is at fault here?

Boy oh boy you must really have a lot of hate for Christianity Tric, its rare to see a response from you that you dont mention it. Or maybe were not getting your message here? you may want to go to Church on Sunday and get some spirit into your soul, maybe that what the inner you is wanting?

So BJ your saying now that they all loved the Syrians who were killing everyone and therefore the act is justifiable? wow great forward thinking.....