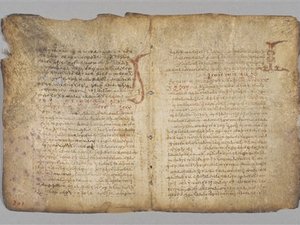 After more than a decade of restoration and study, the public is getting a glimpse at the oldest surviving copy of works by an ancient Greek mathematical genius at the Walters Art Museum in Baltimore.

The exhibition, "Lost and Found: The Secrets of Archimedes," which opened Sunday, tells the story of the 1,000-year-old text and the work of dozens of scientists and scholars who uncovered its secrets. After the exhibition closes Jan. 1, the Archimedes Palimpsest will be returned to its anonymous owner.

"This is a chance for the public to see the Archimedes Palimpsest in all its glory," said Will Noel, Archimedes Project director and Walters curator of manuscripts and rare books. When the manuscript sold at auction for $2 million in 1998, it was known to contain some of Archimedes' most famous theories.

"People were skeptical that we would find anything else," Noel said. The manuscript was in tatters when it arrived at the Walters more than 12 years ago, but modern technology has revealed more texts from the mathematician, physicist, inventor, engineer and astronomer who lived in Greek Syracuse in the third century B.C. and others.

Archimedes is known for engineering feats, such as water pumps and catapults, and his mathematical writings. But he's also immortalized in the exclamation "Eureka!" (I have found it!), which he was said to proclaim after making a discovery about water displacement while in the bath.

Scholars believe a 10th-century scribe copied the text from Archimedes' original Greek scrolls, but 200 years later, another scribe scraped the text from the parchment, rebound it and reused it as a prayer book. (A palimpsest is a generic term for a parchment or page that's been written on more than once, where the original writing was scraped or rubbed off.) Ironically, this affront to what is now considered such a rare piece of history may have been the key to its persistence, Noel said.

"I feel pretty good about Johannes Myronas," Noel said, referring to the scribe whose name was uncovered by x-ray beams on the first page. "If he did not create this prayer book, there was no other way it would have survived. Because of its Christian disguise it was not neglected."

The prayer book was cared for through the centuries until 1844 when it was found in a Constantinople convent's collection. And in 1906, Johan Ludwig Heiberg recognized the text contained previously unknown works by Archimedes and created a new edition of his works.

The manuscript then disappeared for decades and resurfaced in France, where researchers believe a collector commissioned forgery paintings over the text after 1938. These forgeries and the glue binding the book together posed the biggest challenge to conservators, according to Abigail Quandt, senior conservator of manuscripts and rare books.

Quandt remembers seeing a story about the auction of the palimpsest.

"I thought, 'Oh my God! I feel bad for the conservator who will have to work with that,'" she said. "And then it ended up at the Walters and I had to eat my words."

The process of conserving the book and imaging it was slow, including four years just to take the book apart. But along the way Quandt came up with new technologies that can be applied to other projects.

"I had to invent new procedures for working on parchment that was so incredibly deteriorated," she said.

Most of the text in the manuscript was recovered using multispectral imaging, but the toughest leaves were taken to the Stanford Synchrotron Radiation Lightsource lab. There, X-ray beams were used to reveal text beneath the forgery paintings and heavy grime.

But visitors to the exhibition won't need any special technology to see the original writings on the pages.

"The Archimedes text is quite visible to the naked eye," Quandt said.

The conservation work is expected to be complete by the end of the year, but the scholarly work will continue for years.

"This was a project where you put in a huge amount of effort, but you are always getting more back," Noel said. "I'm not sure it's over. Our data is on the web for other people to use and they could get much more from this."