Jumblat: Hariri Told Me 'They'll Either Kill You or Me', Confrontation Began with Attack on Hamadeh 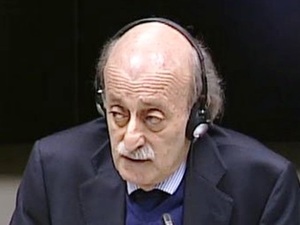 Progressive Socialist Party chief MP Walid Jumblat said on Tuesday that the Syrian regime took the failure to abolish political confessionalism in Lebanon as an excuse to remain in the country, adding the bombing that targeted MP Marwan Hamadeh was the first warning to ex-PM Rafik Hariri.

“The Taef Accord had called for abolishing the political sectarian system but this has not been achieved,” Jumblat told the Special Tribunal for Lebanon on the second day of his testimony.

“The failure to abolish political confessionalism was an excuse for the Syrians to stay in Lebanon,” he said.

Jumblat reiterated that he was allied with the Syrian regime, but following the extension of pro-Syrian President Emile Lahoud's term in 2004, “I said enough.”

“It was time for Lebanon to become an independent state,” he told the STL.

"Hariri and I had the same conviction on the necessity of Syria's pullout from Lebanon based on the Taef," he said.

Jumblat told the Trial Chamber that he was among officials who sought to expand the opposition against Lahoud's extension and the practices of the security system.

The opposition began to gather stream through meetings held by anti-Syria politicians at the Bristol Hotel in Beirut. “Several such meetings were held at my residence in Beirut,” said the lawmaker.

“There was no difference between the Lebanese and Syrian intelligence apparatuses because they had one leader – Syrian President Bashar Assad and his representative Lahoud,” he added.

Jumblat said he was not surprised to be accused of being an Israeli agent and a "traitor" by pro-Syria politicians.

The PSP chief described Assad as one of the “tyrants” ruling the Arab world.

Jumblat also recounted to the court the circumstances of the bombing that targeted Hamadeh in Beirut in October 2004.

After Hamadeh survived the assassination attempt, a former Syrian military officer, Hekmat al-Shehabi, called him and told him to be careful, said the MP.

Then Syrian Vice President Abdul Halim Khaddam visited Hamadeh and said he had also been the target of an assassination attempt plotted by Rifaat Assad.

“According to my political conclusion, he was indirectly referring to the Syrian regime,” the lawmaker said.

“Hamadeh's assassination attempt was an interpretation of Assad's threat to Hariri,” said Jumblat. “It was the first clear message of … confrontation.”

As the session resumed after a lunch break, Jumblat revealed that Hariri told him on February 8, 2005, "They'll either kill you or me."

He said “weekly consultations” were held after Hariri's resignation in October 2004 “on how to engage in the confrontation that was aimed at forming a government that would be independent from Syrian hegemony.”

“Lebanon must be a 'safe flank' for Syria but Lebanon also has the right to have its independent policies and this was my stance when I was an ally of Syria,” Jumblat told the court.

“I believed that when the Syrians withdraw, we would devise a joint defense plan to repel any Israeli attack on Lebanon, as we are two Arab countries engaged in a historic confrontation with Israel,” said Jumblat.

“Joint battles were fought in the Bekaa plain in 1982 but I was insistent on Syria's withdrawal. However, I wanted coordination with Syria in the event of an Israeli aggression,” he added.

The PSP leader revealed that “every public employee who spoke to Walid Jumblat would receive threats.”

Jumblat pointed out that the guard platoon outside Hariri's house was curtailed months before the assassination.

“Suspicious movements took place outside my own house in Beirut ... The army and General Security staged intimidation patrols,” he added.

In response to a question on the legality of such practices, Jumblat said: “There was no law except on paper and the law that was being enforced was the law of the Lebanese-Syrian security apparatus.”

Turning to the issue of U.N. Security Council Resolution 1559 (2004) -- which calls for the withdrawal of foreign forces from the country and the disarmament of all militias – Jumblat noted that Hariri did not tackle “the issue of the arms of the resistance in any way whatsoever” and that he was an Arab nationalist.

“Hariri deemed the arms clause in Resolution 1559 as unacceptable and impossible to implement as he noted that it was necessary to engage with another component of the country which is the resistance (Hizbullah),” added Jumblat.

On his first day of testimony, Jumblat told the court based in The Hague that Hariri was sad and angry after Assad insisted in August 2004 that the ex-PM support a constitutional amendment to extend the presidency of Lahoud.

Assad threatened Hariri at the meeting they held in Damascus that he will destroy Lebanon if he rejects the extension, said Jumblat.

“Assad showed hostility towards Rafik Hariri before he was elected president,” he added.

Several politicians who have testified at the STL before Jumblat made revelations that Hariri had confined to them about Assad's threat.

Five Hizbullah members have been charged with plotting Hariri's Feb. 14, 2005 assassination in a massive explosion at the Beirut seafront but have not been arrested. Their trial in absentia began in January 2014 and is ongoing.

Tell them who assassinated your father.

Syria is gone from Lebanon, ofcourse you would rather want ISIS and Nusra to bring Lebanon into the "Caliphate" fold. That would be perfect for you.

Sure. They will acclaim a Wilayat Al Faqih and an Islamic Republic.

Syria has been out of Lebanon for 10 years, what has jumby and his "sovereignty-promoting" saudi allies done since? Did they implement anything? Advance the country in any way? What is your excuse now that you dont have Syria to blame for your own corruption and incompetence?

Oh so that's the new excuse now, Hezbollah? Joumby is complaining that the Syrians prevented the abolition of confessionalism, as if he is for it?? He is THE one who most profits from the sectarian system and the role of "kingmaker" it puts him in. In a secular democracy nobody would even notice him, but here he is the one who tips the scales, from one side to another, depending on his schizophrenia and/or the amount of the last check he got.

In contrast, Berri did propose ending political sectarianism but got burnt to the ground by M14 politicians and medias:
https://now.mmedia.me/lb/en/commentary/mr_berri_is_playing_another_nasty_game

Mystic, Syria may be gone from Lebanon but what is for sure is Hezbollah is keeping the seat warm for it in the hope that Syria would one day return back. And the answer is a direct NO, no we don't want a Caliphate to rule us and neither do we want a Wilayet El Faquih to rule us either. Lebanon as it is right now is exactly what is right for this country of 18 sects, anyone toying with this fabric is sure going to let a deadly genie out of the bottle. It has worked by and large for decades, let's keep it this way. And to cap it off for this thread is a big NO for Syrian rule, either directly or by proxy, let Lebanon be for the Lebanese, end of story.

We will NEVER forget that Syria is our No 1 enemy.
They have killed our people, stolen our houses and destroyed our economy.
May the Butcher - and his father - go and burn in eternal fire of Hell.

Anyone who supports an exclusively confessional armed militia which has sworn allegiance to vilayet e faqih has no credibility in accusing anyone of sectarianism.

what about Aoun's time Southy? Not over yet in your book?? :)

true southy true... jeddo is in his prime... Aoun is extremely coherent and objective... true... true... as coherent as FT as a mater of fact...

Syria is our No 1 enemy.
They have killed our people, stolen our houses and destroyed our economy.
May the Butcher - and his father - go and burn in eternal fire of Hell.

What did the late Rafik Hariri mean to you people I am interested in what people thought of him as a elected Lebanese leader.

Jumblat reiterated that he was allied with the Syrian regime, but following the extension of pro-Syrian President Emile Lahoud's term in 2004, “I said enough.”

You & almost every other Lebanese leader were allied with Syria.

You all changed when you got wind of change...You all follow the strong & not your country.

But there was one who stood against Syrian rule over Lebanon & he stood alone.

The General of Generals...Michel Aoun! not after they left but whilst they were stomping on Lebanese heads with all the Lebanese leaders support...Geagea even helped them fight the LAF.

errr... no whyaskwhy.... the world knows... but FT and Momo beg to differ! They have undisputed truth that Israel did it, with the help op of E.T... yes, yes, the Extraterrestrial...