Study: Extreme Weather already on Increase Due to Climate Change 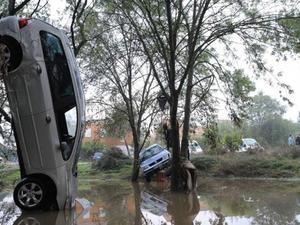 Extreme heatwaves and heavy rain storms are already happening with increasing regularity worldwide because of manmade climate change, according to new research.

Global warming over the last century means heat extremes that previously only occurred once every 1,000 days are happening four to five times more often, the study published in Nature Climate Change said.

It found that one in five extreme rain events experienced globally are a result of the 0.85C global rise in temperature since the Industrial Revolution, as power plants, factories and cars continue to pump out greenhouse gas emissions.

“A lot of us and our colleagues were surprised by how high these numbers are already now in the present day climate,” said Dr Erich Markus Fischer from the Swiss Federal Institute of Technology.

What represents an extreme day varies depending on the background climate. In the south-east of England, for example, temperatures used to reach 33.2C once every 1,000 days, but are now happening as much as once every 200 days.

Future warming will bring a more volatile, dangerous world, even if the world manages to keep temperature rises within a 2C limit to which governments have committed, Fischer’s research found. On average, any given place on Earth will experience 60% more extreme rain events and 27 extremely hot days.

Numbers of extreme weather events spiral even higher at a rise of 3C, a level of warming that the world is on track to exceed with current levels of manmade global greenhouse gas emissions.

Drawing links between specific weather events and climate change can erode the sense that climate change is something that will happen in the future, rather than causing havoc in the present. But the science, called attribution, has proved complicated.

Peter Stott, a scientist at the UK’s Met Office Hadley Centre, said the new study was an important step in attribution science.

“What has been lacking up to now is a robust calculation of how much more likely extreme temperatures and rainfall have become worldwide.”

The study shows warming of the atmosphere increases the number of times temperatures reach extreme levels and evaporates more water from the oceans. It is from this hotter, wetter background that extreme weather events emerge.

“When we talk about 15-day precipitation or 15-day heat waves rather than one-day cases, one very robust finding is the longer the period the higher the fraction that is attributable to warming,” said Fischer.

The study also found that the effects of warming will vary around the world. Weather events at the equator will become more extreme with 2C of warming, meaning tropical countries already dealing with frail infrastructure and poverty will experience more than 50 times as many extremely hot days and 2.5 times as many rainy ones.

But some already dry regions including the parts of the Mediterranean, North Africa, Chile, the Middle East and Australia will experience less heavy rain days.

“In the UK, for a one-in-a-thousand day, which is one in three years, we would probably be well adapted to that,” said Stott. “But I think we’ve shown that we are vulnerable to more extreme situations – those that happen once in a century. For example the wet winter we had in 2013-14. Or indeed the heatwave we had back in 2003 when many vulnerable, elderly people died. But in the tropics, in parts of the developing world, they are extremely vulnerable to one-in-three year events.”

Saleemul Huq, a Bangladeshi scientist who has been involved in the UN climate negotiations, said the developing world was already struggling to cope with extreme events.

“The increased probability of high rainfall events will enhance the adverse impacts of these events in many parts of the world, particularly for vulnerable communities. For example short bursts of intense rainfall in Dhaka already cause huge traffic jams and misery for its citizens,” he said.