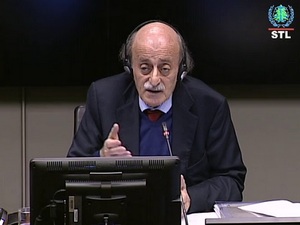 Progressive Socialist Party chief MP Walid Jumblat recounted on Wednesday how the regime of Syrian President Bashar Assad used its allies in Lebanon to limit the powers of ex-Prime Minister Rafik Hariri and his supporters.

“Hariri was working on expanding the opposition on the unconstitutional extension” of pro-Syrian President Emile Lahoud's term in 2004, Jumblat told the Special Tribunal for Lebanon on the third day of his testimony.

But one of Syria's allies, then Interior Minister Suleiman Franjieh proposed an electoral draft-law that limited the powers of Hariri and the opposition backing him, said Jumblat.

He told the Trial Chamber that the draft-law was an attempt to undermine his representation and that of Hariri. “That's why we rejected it.”

Franjieh, an MP who heads the Marada Movement, is a good friend of Assad, said Jumblat. “He used to act as a gang leader” when he was interior minister.

The PSP chief also revealed that the lawmaker accused him on several occasions of being an Israeli agent.

A voice of recording of a February 1, 2005 meeting between Hariri and with then Syrian deputy Foreign Minister Walid al-Muallem was aired before the court to demonstrate the influence of Syria on political proceedings in Lebanon.

The meeting showed an upset Hariri disputing with the Syrian official over the distribution of electoral districts for the 2005 parliamentary elections.

Hariri also informed Muallem that he went ahead with the extension of Lahoud's term in order to avoid a dispute with Syria and President Bashar Assad, but added that “it is time that Lebanon be governed from Lebanon, not Syria,” explained Jumblat to the Prosecution.

The MP added: “I believe Muallem was seeking to appease Hariri before his assassination.”

“I know the ways the Syrian regime works. It acted the same way weeks before the assassination of Kamal Jumblat” in 1977, he said.

“Hariri wanted Lebanon to be governed independently from Syria and its security agencies, but while remaining its ally,” he continued when asked about the former PM's discussions with Muallem in the recording.

“He wanted to be reassured that he will be able to perform his duties as prime minister without Syria treating Lebanon as a Syrian province,” he stated.

The Prosecution then concluded its cross-examination of the MP and was followed by the Legal Representative of the Victims and then the Defense.

The Defense will continue interrogating Jumblat on Thursday.

The attempt on the life of MP Marwan Hamadeh in October 2004 was the first warning to Hariri, he said.

“Hamadeh's assassination attempt was an interpretation of Assad's threat to Hariri,” said Jumblat. “It was the first clear message of … confrontation.”

According to Jumblat and several politicians who made testimonies at the STL, Hariri had confided to them that during a meeting they held in Damascus in August 2004, Assad threatened to destroy Lebanon if the former PM rejected the extension of Lahoud's term.

Five Hizbullah members have been charged with plotting Hariri's assassination in a massive explosion at the Beirut seafront but have not been arrested. Their trial in absentia began in January 2014 and is ongoing.

FT, without my pointing my finger at anyone, when so many M14 MPs get assassinated, this starting from Rafic Hariri who hitherto saw his state security removed away by Lahoud, when during the time of Syria's lackeys in power they tried as immediately to dissimulate all evidence on the ground, to whitewash it with false evidence and proofs, when M14 leaders are forced to strict home confinement and even heavier security, when Saad Hariri is forced to live away from his homeland, when he wins two straight elections only to find that Hezbollah has forced him to a string of thuggery and humiliations, I mean ya FT, whom should we suspect then, the Vatican or Walt Disney? For God's sake get real.

Nothing is worth more than this phrase and I quote: Progressive Socialist Party chief MP Walid Jumblat recounted on Wednesday how the regime of Syrian President Bashar Assad used its allies in Lebanon to limit the powers of ex-Prime Minister Rafik Hariri and his supporters. Unquote. It's 2015 now, Syria is literally out of Lebanon, the Assad regime is struggling to survive, but nothing has changed as yet, Syria still exerts pressure on those it opposes in Lebanon, either directly or by proxy, the Assad regime still believes it will survive. Wlak even its Lebanese lackeys are bleeding to death, we shall see Inshallah.

Everybody sees it FT... everybody but you and the likes of you...

i think he is a bishop in the chess game i wonder who is the queen :)

SA, that would possibly be the man in your avatar, no wait! He can't, he's a caporal.

FT, I was hoping that you wouldn't bring yourself that low. I thought that you still had it in you to debate intelligently and without having to go for personal attacks. FT, people have likened you to a certain kitchen feline, yet for all I know I tried telling them to the opposite. You yellows, in your usual ways you can't change, we talk of the issues, you talk of us who post. Think of it, what is your contribution to humanity if this is all you can do. Naharnet writes of people who affect us, we focus on them, but people like you ya FT, you're contribution will do little if this is all you can do. If you still have it in you, an apology from you would now be overdue.

Canandianpaul, you're right, I am now sadly reaching that same conclusion, however there was a time when FT was a lot less sanguine, but I guess all those dots he has to add to his acronym aren't helping either.

FT, then apologize, it was your chance to pull yourself above that level, and in any case, it won't change much. Whatever ya FT, calm down, you're literally busting from the seams.

***FT, then don't apologize, it was your chance to pull yourself above that level, and in any case, it won't change much. Whatever ya FT, calm down, you're literally busting from the seams.

Roar, Satan, the evil Al Shaytan, you cannot but provoke. If I am an old relic, then your dad and mom must be prehistoric, and your Aoun, monolithic. Then ya evil tainted satanic possessed provocateur, I told you before, Satan lives inside you, you are so dirt cheap and deranged that you believe that everyone behaves like you. But as sick as you are, nothing will stick but on yourself. Last time I got you a hard shave between your legs, beware, this time I will not spare you, and remember, don't get started again about you living in Australia, because as an evil shaytan, you are living in Beirut and you were posting all the time at the FPM forum. Now you behave before I start it all over again.

Like the trashing I keep giving you every now and then. Ya Roar, I told you before, you are a liar, the FPM is paying you to provoke us on this forum. You do not live in Australia but right here in the heart of East Beirut. When posts become too disturbing for your yellow side, your orders come, "Go and derail the posts of Naharnet". No one here but you posts as multiple posters. But as I said before, you are sick, deranged and full of hatred. Satan the devil lives inside of you, he has taken all the space of your mind, of your heart and your soul, he has filled you with his lies to the point where you cannot but lie, lie and lie, and when we catch you with your pants down, the only way out for you is to cover up with more lies. Now see how you will repeat what I said, liar. What time is it in Australia, except if Satan refuses to let go of you. Sick evil creature.

The Roar, the liar, the thing possessed by Satan the devil, tonight, Australia time, Satan will come to make you do trances, but we are now praying for you, so that you will find peace. 3an jad, I feel sorry for you, I mean all these lies, fabrications, wild stories. You were banned from Naharnet, poor cheap thing, for someone who claims to live down under, you're attached to Lebanon, to Naharnet, only a possessed person can be like you. 3an jad, you're so sick, you need 30 priests to exorcise you ya habileh, can't you see? We all know you now ya FPM troll. Come join me for diner in Downtown Beirut, I'll buy you a beer, or else stop lying, walla you're Boaring us.

Roar, send me your mother and your sisters and they'll tell you a few things about biting. Aoun your papa is a very ugly looking thing, you his son look even worse, no wonder you're always so angry, the mirror is certainly not your best friend, now send me your females and let them relate back to you and your dad about the things they've been missing. By the way, I know that you live here in Beirut, why didn't you take my invitation to join me in downtown Beirut opposite parliament? 3an jad ya habileh, just a liar and a coward like your dad Aoun. OK, no more wasting time, send your women.

ouch! I stroke a nerve it seems :)

(1) Naharnet, in brief, this thing called the Roar, he is not an haphazard poster, he actually works for the FPM in the Orange Room. he does not live in Australia as he is lying to us but here in Beirut. He has 6 friends, 3 of them co-workers who are tasked to check on other forums what they call target threads, in simpler words threads that have as subject Aoun, or the FPM and by lesser importance Hezbollah. His role and that of his mates is to disrupt the normal flow of the discussions with personal attacks, derogations and insults to the point where it hopefully gets derailed. Another technique is to thumb down or up where it so applies. He was banned from Naharnet for 2 weeks, during all that time he kept posting at the FPM both as a Mod and as a poster.

). Naharnet. On the Roar. His activities go by Beirut time and certainly not by Australia time. His IPs are Lebanese IPs, even if the FPM has tried to mask them under several layers. I am doing best as I could to respect the ethics of the profession by limiting the findings of my team, lest we forget that I own a company in the trade of this trade, but if Naharnet does not restrain this character, then I will divulge more and more info on the Roar's activities including those of other FPM trolls. Just to recap, The Roar is NOT just another poster, but a paid FPM Troll who actually works at the Orange Room, and also posts from there including the other persons who work with him and in tandem, the aim is to disrupt and derail. If the Naharnet mods don't wake up, someone will do it for them.