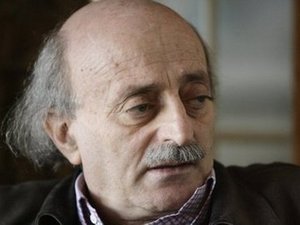 “Hariri was killed for political reasons,” Jumblat told the Special Tribunal for Lebanon during the Defense Counsel's cross-examination.

His statement came after he was asked whether Hariri's murder was linked to corruption.

Jumblat also refuted claims that Saudi Arabia had pushed Hariri to become a politician as a result of a conflict with Syria.

“Hariri was an ambitious man and it was his right to enter the political scene in Lebanon,” said the MP on the fourth day of testimony.

“Saudi-Syrian ties were excellent until Hariri's assassination,” he added.

Jumblat denied that the amendment of the Lebanese constitution and the approval of the Taef Agreement in 1989 was a Saudi demand.

It came as a result of a “Lebanese demand to restore the internal balance. It was not a Saudi or Syrian demand,” he told the Trial Chamber.

“The Taef Accord came as a result of a deal between the Lebanese, the Saudis and the Syrians,” he added.

The PSP chief told the court that the Syrian presence was aimed at implementing the Taef but it later turned into a hegemonic power.

“The majority of Sunnis in Lebanon are moderates,” he said.

Jumblat described al-Mustaqbal, which is now headed by Hariri's son Saad as a “moderate movement.”

“I have not said that fundamentalist members had become part of it,” said the MP.

On Wednesday, Jumblat recounted how the regime of Syrian President Bashar Assad used its allies in Lebanon to limit the powers of Hariri and his supporters.

A voice of recording of a February 1, 2005 meeting between Hariri and with then Syrian deputy Foreign Minister Walid al-Muallem was aired before the court to demonstrate the influence of Syria on political proceedings in Lebanon.

Walid Jumblatt's testimony is absolutely crucial in the STL's efforts to dig out the truth and bring to justice the culprits of Hariri's assassination. Even though the recorded evidence in itself of this brazen and cowardly act is in itself incriminatory, but right now a lot rests on Walid Jumblatt. At this point and juncture Jumblatt's total honesty, without any erring or anything of the sort, just let Jumblatt narrate the whole truth as witnessed by him, that alone will take the procedures light-years ahead and in progress. I am one who truly hopes that Jumblatt will divulge the whole truth because even though suspects now more than ever cannot dispute their roles, testimonies like Jumblatts are what will make these suspicions stick even more.

JSL, justice will be done, it may be slow, maybe a bit too slow for our liking, but justice is being done. Every step is being taken with precaution, and the day will come, God willing sooner than later, when justice will be done. The culprits will be named, shamed and arrested and those who will run will have little place to hide, they will be caught. This is why I am one person who pins such a great importance on Jumblatt's testimony. Justice has to be made, not only for Rafic Hariri, but also for all those who fell in their resistance to Syrian hegemonic designs. We shall prevail, we shall overcome.

Al Mustaqbal or Future Movement is a liberal movement. As an example The Future Movement's youth wing, Future Youth, is a member of the International Federation of Liberal Youth (IFLRY), and hosted the 2009 IFLRY Executive conference in Beirut.
The Young Democrats in the US are part of IFLRY as an example.

Hezbollah, (The Party of God), is a Shi'a Islamist militant group and political party that has a paramilitary wing and a Jihad Council.The United States,the Gulf Cooperation Council,Canada,and Israel have classified Hezbollah as a terrorist organization, though in 2015 an assessment from the U.S. director of National Intelligence removed it from its list of terror threats to the United States (while it remains classified by the US as a terrorist organization).

ISIL (Islamic State of Iraq and the Levant) is an Islamic extremist terrorist organization controlling territory in Iraq and Syria, with limited territorial control in Libya and Nigeria.

Thus Hezbollah and ISIL are considered by a great many countries as terrorist organization while Future Movement or Al Mustaqbal is recognized internationally as a Liberal political movement.

Didn't know you are an antisemite and a conspiracy theorist with fascist tendencies.

Whyaskwhy, anger and nepotism are their usual signatures, they are indeed so predictable.

“Hariri was killed for political reasons,” Jumblat told the Special Tribunal for Lebanon during the Defense Counsel's cross-examination.