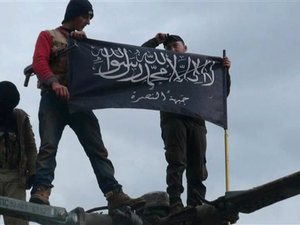 Gunmen affiliated to al-Qaida group al-Nusra Front and the Islamic State of Iraq and the Levant (ISIL) reportedly tried to provoke Syrian refugees, who are settling in the northeastern border town of Arsal, to join al-Qalamoun battle.

According to al-Akhbar newspaper published on Friday, several Syrians gathered in al-Sabil and Tariq al-Jammala in northeastern Arsal, two kilometers from al-Masyada crossing, to respond to the two groups' calls and “aid the jihadists on the outskirts.”

A witness told the daily that “al-Nusra Front gunmen have been trying since Wednesday to convince Syrian refugees to join the battle and head to the outskirts to battle Hizbullah and the Syrian forces on the outskirts of Assal al-Wared and Ras al-Maara.”

The control of the area on the outskirts of Assal al-Wared came following heavy clashes with al-Nusra Front, it said in a statement.

The Britain-based Observatory stressed that there were casualties from both sides.

Hizbullah's Secretary General Sayyed Hassan Nasrallah said in a televised speech late Tuesday that his group will attack militants in Qalamoun, stressing that "time will tell" when the battle will become full blown.

He added that there will be no formal announcement before the widely anticipated battle begins.

Nasrallah vowed that his group will continue fighting in Syria along with President Bashar Assad's forces.

Fighters linked to ISIL and al-Nusra Front in the Syrian al-Qalamoun have been allegedly mobilizing and moving closer to the border with Lebanon ahead of a battle along the country's eastern border.

The Lebanese army frequently clashes with the militants in their hideouts near the Syria border.

The IS, which controls several areas in Syria and Iraq, aims to spread to Lebanon as its fighters position in the outskirts of Bekaa towns bordering Syria and the Lebanese army is in adamant efforts to stop their efforts to infiltrate the country.

Despite ideological similarities, the two groups are opposed and in conflict with each other in other parts of Syria, particularly in the north.

The Gulfs, Turkey and the Wests fault, they were the ones to set those wars off. They hired takfiris to eradicate all minorities from the middle east.

Without the Resistance, then the takfiris would've succeeded.

takfiris are so desperate that they try to force poor refugees to fight with them.

Before the Hezb got us involved in Syria, the Jihadists were a very small part of the revolt. Now they are the dominant elements. Good job dummies.

That is the worst kind of lie you ever wrote. So the takfiris just come out of nowhere? Al Nusra and ISIS were around since the beginning of the conflict. Ofcourse Hariri & co wants to do everything in their power to hide it.

It is not a resistance.

Indeed nusrats and da3eshits sound desperate with their calls for help, just as their supporters here who keep whining.
At this point everyone knows what is what, the threat of takfiris and their aggressions are beyond clear. Only those with undeclared agendas still complain about hezbollah's vital role in defending lebanon.

You are the hypocrite of all arabdemocrat, stating something like that is a pure lie and you know it. Why do you think the West in general lost interest in Syria? Because they finally realized it were takfiris all along. Nobody cares anymore, now they even turn to Assad for negotiations.

This is what I've always said, Arsal is a rat hole and that is why the army should not have spared it.

Zahle that is nonsense, so you want the Resistance to destroy their weapons and let their throats be slit, then wait for the LAF to be overrun and then we can all give up. Simply not going to happen, accept the Resistance and support them and the LAF in their common struggle.

Mystic, ya khaye, did you read properly what Zahle wrote? Please do.

I did read it Phoenix, it is nonsense I repeat.
You people need to understand, that we live in a new era. We got takfiris next door lusting to get in, if the phalangists actually dropped their own lost for power and actually cared about the Christians survival in the region and not just their own egos, then you would be more powerful.

We do not live in the 80's anymore, you people seem to think we do. Forget about the Taef, I don't think the Taef included having takfiris on our borders did it now?

But ofcourse, with someone such as Geagea leading you to side with Wahabis, then it will mean your doom Phoenix & Zahle.

Meant to write, you should drop your lust for power go and help fellow Christians instead, atleast you would be following the words of Jesus then.

Mystic, your reply just confirms that you did not read well Zahle's post, and if you read it, you must have read it wrongly. Anyway, today this is as far as I can go with you, sorry ya khaye.

Dear phoenix, I also urge you and zahle to read my comment above probaly, then we can discuss about that, if your phalangist pride don't get the best of you.