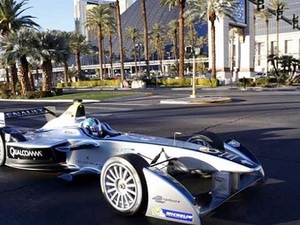 You’d think it was the ultimate petrolhead paradise, and indeed there is plenty at the Williams F1 headquarters – in an old Johnson and Johnson factory in Oxfordshire – to stimulate the inner Toad. Portraits of drivers Felipe Massa and Valtteri Bottas gaze down from the walls at the F1 car which dominates the reception area, looking, to the uninitiated eye like a high-tech stick insect, while topiary outside depicts a busy pit stop.

But the surprise is that, far from harboring an aggressive Top-Gear-type disdain for all things green, the company is reinventing itself as a champion of environmentally friendly technology. Yesterday it unveiled plans to fit aerofoils developed from racing cars to supermarket fridges so as to save energy, while a fuel-saving F1 flywheel is being tried out in buses. It is even supplying ecologically- correct supercars for the next Bond film.

This is all part of an unlikely but wide-ranging greening of motorsport, which will complete its first ten-race Formula E season for electric cars in London in June. It has provoked a surge of green technology that will ultimately change the hatchback as much as Brands Hatch.

If you listen to the great Alain Prost, of e.dams Renault, this is partly a generational necessity. “F1”, he says, “is for people over 40”. Formula E – which began its first season in polluted Beijing last September and ends it in Battersea Park in two months’ time – aims to attract a new audience by making green sexy. Officially, if less catchily, it aims to “help develop electronic vehicle technology, accelerate interest and promote sustainability”.

In fact, this is just the latest twist in a long track record. Formula 1 cars have effectively been green hybrids since 2009, and last year had abruptly to cut the amount of fuel they could use in a race by a third – prompting wholescale changes in design.

“It was an enormous challenge”, Pat Symonds, Williams’ legendary Chief Technical Officer, told me. “But as a sport we recognized it was our duty. As role models, we have a moral obligation.” Besides, he added, reputation-conscious sponsoring firms expected it.

Of course, as Michael O’Driscoll, the group CEO, himself admits: “Greening the small community of motorsport in itself makes no difference whatsoever” to global greenhouse gas emissions. The real impact would be in applying what is learned from its high-tech operations to ordinary life. And here, he believes, “there is a huge marketplace”.

Open supermarket fridges will test whether he is right. They are kept cold by a curtain of frigid air blown down from top to bottom along their fronts, but this tends to spill out, wasting energy and afflicting shoppers with the familiar 'cold aisle syndrome’. But now Sainsbury’s has been trying out Williams-designed aerofoils, unobtrusively added to the fridges shelves.

Just as in a racing car, the aerofoils are there to redirect the flow of air. In a car, they largely push the air upwards to help it 'stick’ to the ground; in the fridge they stop it escaping into the aisle. So far, says Sainsbury’s, they have cut energy use by 30 per cent. Since Britain’s 2,300 supermarkets and 40,000 convenience stores are reckoned to account for more than 5 per cent of the country’s total energy use, and since over 60 per cent of that goes on refrigeration, the technology may make a measurable difference.

Similarly, the company developed flywheels - capable of very quickly capturing and releasing energy from braking and of releasing it equally fast – to improve the performance of racing cars. In the end they were never used in F1, but are now being tried out in buses, whose constant stop-start operation may suit them well. And, with Jaguar, it has produced a 200 mph hybrid supercar “with the performance of a Bugatti, the fuel efficiency of a Toyota Prius, and the battery range of a Chevy Volt” to be used by the villains in the next Bond film.

Other projects include producing the batteries for the first two seasons of formula E, working with thin-film solar leaders Hanergy on ways of storing power from the sun, and on a secret electric bike project with Brompton.

It's all more natural than it seems, because while ordinary car makers are largely marketing operations, F1 firms are necessarily research and engineering companies whose success or failure plays out visibly on the circuit. “Our raison d’etre has always been to go racing,” says O’Driscoll. “But everything we do to get cars to go faster helps us in finding more energy efficient solutions. It all makes really good sense.”

More sense than you would expect, perhaps, from the macho image of motorsport, or its apparently outdated middle-aged Mr Toads.