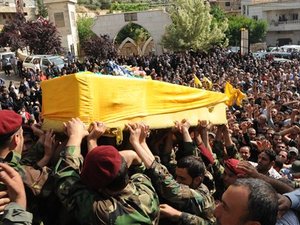 Hizbullah stated on Friday that the number of fighters who were killed in Syria's al-Qalamoun front were only three, denying media reports claiming otherwise.

“Some Lebanese and Arab media reports continue to broadcast false reports on the number of Hizbullah fighters killed in the last few days in al-Qalamoun front claiming that the number has totaled 40,” the statement said.

“Hizbullah emphasizes that these reports are totally untrue and baseless. Only three fighters have been killed since the confrontations began. Their honorable families have been notified,” it added.

Some media outlets said that more than 40 of Hizbullah fighters had died in fighting against Islamic militants near the border with Lebanon this week.

However, al-Nusra Front said in statement via Twitter later during the day: “A large number of Hizbullah and Syrian army members were killed and others wounded in fighting with al-Fatah al-Qalamoun army in Assal al-Wared.

“After Hizbullah infiltrated the area from the Lebanese side, the Mujahedin made a tactical withdrawal from Assal al-Wared to repel the infiltration," added the statement.

“Hizbullah is exploiting Lebanon's land to sneak behind our fighters. We warn the Lebanese, Hizbullah is trying to drag them into a war schemed by Iran."

Hizbullah has been fighting alongside Syrian President Bashar Assad's forces against predominantly Sunni rebels and militants seeking to topple him.

Fighting has intensified in the past week in the mountainous al-Qalamoun region across the border from Lebanon, where militants from the Islamic State group and the al-Qaida-affiliated Nusra Front are entrenched.

Hizbullah and Syrian government troops took control on Thursday of strategic heights in the Syrian region of al-Qalamoun that abuts Lebanon's eastern border.

The control of the area on the outskirts of Assal al-Wared came following heavy clashes with al-Nusra Front.

Caporal should go there...

cling on to whatever you can pajama.boy, after all it's the only glimpse of happiness you can hope for in your miserable life of frustrated hater.

“After Hizbullah infiltrated the area from the Lebanese side, the Mujahedin made a tactical withdrawal from Assal al-Wared to repel the infiltration," added the statement.

mowaten
You have no idea what is good for Lebanon, and you don't care either. You're a iranian loving muppet and only their interests count for you.

No guys, you should listen to the March 14ers and their various gulf media outlets, the Resistance lost around 10.000 Field commanders by now.

All of you guys should swear allegiance to Lebanon. The country is facing tremendous challenges and danger deal with that rather than mutually blame M8 or M14. You guys should get over that

The problem is that the extremist hizbzushaitan is dragging Lebanon once more towards a showdown with other extremists.

these murderers should understand that not a single Lebanese agrees with them, and we all hope for both parties to kill each other till extinction.

"...flamethrower--
unlike you, i care nothing of what goes on in the media. i source my opinions from the street and day to day life, not from the media cesspits you drink from."

Flamethrower is always true to himself: a consistent sectarian.

Uncle FT: you said "cross-read" sources... so, please tell me if it is not media how do you cross-read people on the street that you claim are your sources? LOL

why every time you people can't successfully refute @FT, you accuse him of being sectarian? I've been reading this forum for years and I've never managed to know what is @FT's religion. sometimes I think he's christian, sometimes, Huthi. so I stopped guessing. It's people like you, who are sectarian, FT is pure Huthi.

Bad terrorist FT! Your big kahuna himself swears complete and subservient allegiance to vilayet e faqih in Iran. In fact he admitted that they make all his decisions for him.

God bless and rest in peace to all the beloved martyrs of the Resistance, that gave their lives to Lebanons survival and the rest of the region aswell.

Thanks for confirming that the FSA/Nusra/ISIS are one and the same. Explains why you guys support the takfiris in Qalamoun and elsewhere with all you have.

lol @eagle!!! You always wipe the floor with this pompous self consumed creature;) Well done!

Who cares where his rat hole is so long as he has admitted that he serves vilayet e faqih which makes you subservient to it by proxy.

of course they will downplay... every army does the same to keep the spirits of their soldiers up... so this report is to take with utmost care... except hezbi lovers will give it credit....

wow 23 comments by flamethrower on just one article!

One wonders if General Aoun, who has recently joined forces with the "Evil Axis" through his alliance with Hezbollah and Syria's agents in Lebanon, is the same

man who enthusiastically and staunchly sponsored, advocated and worked hard with the Lebanese lobbyists in the US to prepare, promote and then pass the "Syria Accountability and Lebanese Sovereignty Restoration Act of 2003". An Act that stipulates: "To halt Syrian support for terrorism, end its occupation of Lebanon, stop its development of weapons of mass destruction, cease its illegal importation of Iraqi oil and illegal shipments of weapons and other military items to Iraq, and by so doing hold Syria accountable for the serious international security problems it has caused in the Middle East, and for other purposes."

and M8ers still see bashar as a good man LOLLLLLL

Excerpt from General Aoun's Free Patriotic Movement Party Parliamentary 2005 electoral platform,
"N Resolution 1559 and the 'Taef Accord' both stipulate that all militias (in Lebanon) must be disarmed. This matter raises the paradox of Hezbollah's military existence. Regardless of different opinions on Hezbollah's ideological choices and its relations with Syria, that is suspicious in its intentions towards Lebanon, Hezbollah's military activities were seen in the UN Resolutions frame as resistance acts against occupation until the day Israel withdraw from Lebanon's southern region (May 2000).

After the Israeli withdrawal, legitimacy for Hezbollah' military operations dissipated. Meanwhile, since then, it created a crisis on national and international levels. This status put Lebanon in a confrontation with the international law, while at the same time exerted a threat to the national unity as it indicates that one group Monopolizes Lebanon's national decision making process."
same article

*Question by one of the students: The US considers Hezbollah a terrorist organization. Hezbollah is the son of our country. What will be our position?

"Aoun's answer: "I had previously invited Hezbollah to a solution. I am not willing to assume the results for the policies it follows and for its external ties. I

advised them to abandon the military work and return a political party, for then we congratulated them on liberating Lebanese land. But when Hezbollah wants to stand outside the Lebanese framework for other objectives, we cannot bear the results of its policies. Then I cannot engage in a dialogue with Hezbollah while it is carrying the rifle.

and brainwashed FPMers still claim that aoun never changed his stances... how idiots they are...

Aoun: "I know many things that Hezbollah has done in violation of international laws and agreements, and these actions are considered terrorist"
An-Nahar, 27 February 2002

Aoun: "If Hezbollah wants to liberate Jerusalem then I, Michel Aoun, tell them go ahead. But for them to remain armed in Beirut's Southern Suburbs, then no, because we refuse that their weapons be used as a means of pressure [against the Lebanese]"
Al-Liwa', 17 September 2004

Peace give up your dealing with youth mentality they will grow up to one day...unless they are sent to Syrianam.