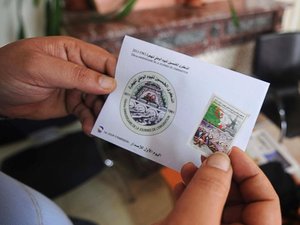 Algeria's post office on Monday issued a new stamp to commemorate the massacre on October 17, 1961, of Algerian-born people in Paris by French police who were breaking up a protest rally.

The stamp, worth 15 dinars ($0.2, 0.15 Euros) shows men beating people to death and throwing bodies into the river Seine, running red with blood, during an incident 50 years ago which is seen as a stain on French history.

Behind them is a bridge from which beaten Algerians are falling, while the Eiffel Tower is in the background in front of a green, white and red flag with Algeria's crescent and star, with the number 50 in red and white.

On October 17, 1961, at the call of Algeria's National Liberation Front, which was fighting for independence from France that year, between 20,000 and 30,000 Muslims from Algeria, men, women and children, came into Paris from the suburbs, to protest against a curfew imposed on them by the police headquarters.

They planned to rally at the famed place de l'Etoile, but as the crowd approached the boulevard Saint-Michel and the Seine, the prefect (governor) of Paris, Maurice Papon, ordered police to halt the demonstration. Police waded into the crowd in a hail of blows and bodies were thrown into the river.

The official toll was given as three dead, including two Algerians, but historians have said that up to several hundred were killed. The police archives remain closed.

The Algerian FLN won independence for the north African country in July 1962.