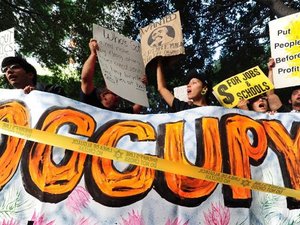 Exactly a month after a few hundred anti-capitalism activists set up camp in New York, the Occupy Wall Street movement has gone international and won the attention of the White House -- even if no one knows where it will go next.

Protesters sheltering under plastic tarps in the well organized camp at Zuccotti Park, near Wall Street, began their second month Monday with plans to follow up on big demonstrations that swept through the popular Times Square area over the weekend.

They not only have set up all the basic needs of an open-air community -- ranging from a cell phone charging station to a library -- but are flush with $275,000 in donations, according to Darrell Prince, an organizer at the protest's finance committee.

The next major event could be on Saturday which will see a "National Day of Protest to Stop Police Brutality," according to the www.occupywallst.org website.

Defying expectations, the movement already has had a huge impact, spawning copycat demonstrations across the United States and London, all with the same underlying message of anger at economic disparities between the top one percent and the other 99 percent.

Though their numbers are still relatively small -- the biggest demonstration gathered between 10,000 and 20,000 people -- senior politicians are paying close attention as the 2012 U.S. presidential contest gathers pace.

The White House said an election campaign trip to North Carolina and Virginia this week would address the need "to ensure that the interests of the 99 percent of Americans is well represented" -- a telling reference to the protesters' slogan.

His spokesman Jay Carney told reporters on Monday: "The president has expressed an understanding of the frustration that the demonstrations manifest and represent."

On the other side, Republican presidential candidates have been scathing in their attacks on the group, signaling that it has at the least become too big to ignore.

"We have bailed out the auto industry, and we should have. We bailed out Wall Street. Now it's time to bail out working Americans. That's what this is about," he said.

"I believe that if my father was alive, he would be right here with all of us involved in this demonstration today."

The protests have so far been mostly peaceful. However, 175 people were arrested in Chicago over the weekend, following other mass arrests in recent days in Boston, Denver and New York.

The main question now is how the Occupy Wall Street movement, known by its initials OWS, will use its growing power. To date not a single specific demand has been issued, prompting ridicule from critics.

However, the strategy of simply providing a big tent for mostly young people unhappy about a stagnant economy and angry at the disconnect between ordinary people and the political-business elites, appears to be working.

Mike Lupica, a columnist for the Daily News in New York, wrote Monday that the unpredictability of OWS was stirring the country "because nobody is sure how big the whole thing is going to get."

Some predict that the rapidly approaching cold weather in New York will drive protestors away.

However, activists deny this. And a symbol of that determination can be found right on the homepage of their website: the detailed agenda posted on the website scrolls down literally forever.

Demonstrators meanwhile have been circulating a leaflet urging their fellow protestors to show maximum restraint to stave off any potential unrest or violence.

It warns against use of drugs and alcohol. It strictly opposes verbal abuse. And it even has restricted the hours of protest drumming to curb the annoyance factor a bit.

"In addition to this neighborhood being near Wall Street and home to many businesses, this is also a residential neighborhood that 64,000 people call home," the blue pamphlet reads in part.

"Know that if even one individual disrespects the community by not following this Good Neighbor Policy that they are most certainly weakening our mission."

Despite the disruption and the massive deployment of police resources to the busy downtown area, New Yorkers also support the protestors, a poll revealed Monday.

Supporters outweighed opponents by three to one, according to the Quinnipiac University poll. Even Republicans, while mostly disagreeing with the protestors' views, agreed 72-23 percent that they had a right to be there.