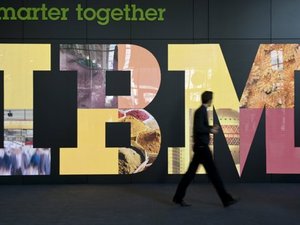 IBM on Monday reported revenue and profit rose in the recently ended quarter but its stock sagged as the U.S. technology stalwart missed marks set by Wall Street analysts.

IBM made a profit of $3.8 billion on total revenue of $26.2 billion, outperforming the same period last year by seven and eight percent respectively.

"In the third quarter, we drove revenue growth, margin expansion and increased earnings as a result of our innovation-based strategy and continued investment in growth initiatives," said IBM chief executive Samuel Palmisano.

"Growth markets delivered outstanding revenue performance across software, hardware, and services and contributed to the company's expanded margins," he continued.

Performance in the quarter prompted the New York State based technology giant to raise its expectations regarding how much money it would take in by the end of the fiscal year.

IBM stock slipped more than three percent to $179.95 per share in after-hours trading that followed release of the earnings results. Analysts had expected IBM to have slightly higher revenue in the quarter.