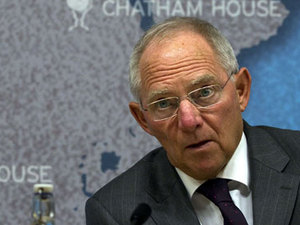 France vowed Tuesday to do everything in its power to keep its triple-A rating following a warning from Moody's, as markets fell after Germany dampened hopes that an EU summit will resolve the Eurozone crisis.

Paris shares tumbled by as much as 2.01 percent early Tuesday after the Moody's warning, following earlier falls on Asian markets amid concerns over the spreading impact of the Eurozone's debt woes.

The ratings warning came with only five days to go before a crucial summit of European leaders that will seek to address the eurozone sovereign debt crisis, which is threatening to drag the global economy back into recession.

French Finance Minister Francois Baroin moved quickly to take the pressure off, promising that France will "take all measures" to keep its cherished top rating.

"We will be there to preserve our triple-A rating... We will do everything in our power not to be downgraded," Baroin told France 2 television after Moody's issued the warning, saying it was concerned over France's financial strength.

"We have room to maneuver," Baroin said. "Everything has been put in place over the past three years to avert a downgrade," he said, pointing to "structural reforms" such as raising the retirement age and public-sector cuts.

But in a sign of growing concerns over the crisis, Baroin also said France's economic growth forecast of 1.75 percent for next year was "probably too high" and that "there is a risk" growth will be below 1.5 percent.

The forecast is "probably too high in relation to economic activity," he said.

Asked if it were possible that French growth would be lower than 1.5 percent next year, Baroin said "there is a risk" because of the "risk of a global slowdown. It is very fast, it could be severe."

Moody's fired the warning shot at France on Monday, saying it would determine over the coming three months whether Europe's second-largest economy merited its stable status.

Moody's said France's "financial strength has weakened, as it has for other euro area sovereigns, because the global financial and economic crisis has led to a deterioration in French government debt metrics -- which are now among the weakest of France's Aaa peers."

If Moody's changes the French credit rating outlook from stable to negative following that assessment, that would signal a likely downgrade in future, something the French government is anxious to avoid as it would lift the cost of borrowing.

The warning came after Berlin sought to lower expectations for a European Union summit this weekend.

Under intense pressure from their international partners at a meeting of G20 finance ministers and central bankers in Paris at the weekend, Europeans pledged to deliver at Sunday's summit.

The summit is to prepare measures to strengthen the Eurozone's financial system from a potential debt default by Greece.

German Finance Minister Wolfgang Schaeuble said Monday that while EU leaders meeting in Brussels were set to "provide cover for uncertainty in financial markets", a permanent solution was unlikely to emerge from the summit.

"Dreams that everything will be resolved and dealt with by next Monday cannot be fulfilled," he said.

The leaders will be looking at a new rescue plan for reducing Greek debt, strengthening European banks with heavy exposure to Greece and using the Eurozone's rescue fund, the 440-billion-euro ($600 billion) European Financial Stability Facility (EFSF), to keep the crisis from spreading to core economies like Spain or Italy.

German daily Handelsblatt on Tuesday quoted EFSF chief Klaus Regling as saying European officials have dropped the idea of turning the EFSF into a bank as a way of boosting its firepower.

"The EFSF will not become a bank," a suggestion that had been discussed at a European level "a number of weeks ago," Regling said, adding that the matter "is no longer under discussion".