Nasrallah to Deliver Speech on Resistance and Liberation Day 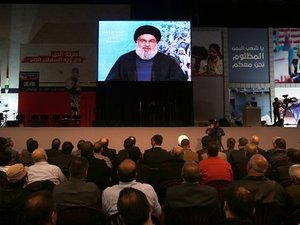 Hizbullah Secretary General Sayyed Hassan Nasrallah is expected to make a televised speech on May 24 on the occasion of Resistance and Liberation Day.

The party will celebrate the occasion during a festival held in the southern region of al-Nabatiyeh.

Nasrallah will tackle various political affairs during his appearance.

Resistance and Liberation Day falls on May 25 and marks the withdrawal of Israeli troops from southern Lebanon in 2000 following an occupation of 22 years.

Loooool it looks like hes got a few more poor souls he needs to send to heaven. Sadly many mothers in the da7yie will be cringing right now....

Oh yeah the message this week will be completely different and one that will explain and change everything from who killed Jimmy Hoffa to Kennedy's assassination, Plus he will liberate Somalia from the Somalis.

Hold your breath for the huge change. Oh and yes almout la Israel!

Another speech to piss you all off, great!

Now that you mention avatars. How come you don't use that little tiny cartoon guy, that burns himself any longer?

samy Aka benzona, how about you change picture to Abo Bakr Al Baghdadi or Al Golani, then you wouldn't have to hide your Wahabi identity any longer.

Hello girls, listen to this debate. A Mostaqbali spokesperson does not allow his fellow guest to discuss the situation in Yemen.

This reminds me of the discussions with you people on Naharnet.

Yes texas, I have been tracking your internet activities for sometime, seems like you have been searching alot for teens with mini-skirts. That is not very nice texas, you should indeed remove such historic from your web browser.

After all, I doubt the hill billys in texas takes kindly to pedophiles. You are seriously making me laugh right now!

the more he speaks the less he says the more he is ridiculed lol. Who the heck is listening anymore? Oh yeah I forgot almout la Israel lol

as if this forum needs any more trolls;)

Aoun: "Hezbollah is collaborating with Israel to legitimize Israel's use of destructive force [against Lebanon]"
-An-Nahar 4 February 2002

Aoun: "How does Hasan Nasrallah say that those who are with 1559 are worse enemies than the Israelis? This is sectarian incitement. They [Hezbollah] are using the people as cattle controlled by financial dependence and fear, then they talk to us about democracy."
An-Nahar, 29 November 2004

don't worry... i was not expecting you to assume your boss positions in the past.. you are nothing but a creature in denial and unable to justify his changes so it drives you mad each time one refers to it...

calm down and take your pills....

Aoun: "We demand from Hezbollah to give up its weapons because its mission is over. The Lebanese know this truth and so does Hezbollah. And the Shebaa Farms issue is simply an excuse that is illegitimate legally, practically, and principally."
An-Nahar, 31 January 2005

Aoun: "If Hezbollah wants to liberate Jerusalem then I, Michel Aoun, tell them go ahead. But for them to remain armed in Beirut's Southern Suburbs, then no, because we refuse that their weapons be used as a means of pressure [against the Lebanese]"
Al-Liwa', 17 September 2004

sure aoun never was against hezbollah when in exile...;)

the point is that those who say the very same things today are labeled as "takfiris" or zionists" by FPMers... for FPMers yesterday these statements were true... but today they are false when nothing changed with hezbis in between! LOL

if there were an ounce of consistency in their thinking today they would not have turned their coats to work with those they called "terrorists" yesterday just for a bit of power and money!
LOLL

sure ft gay boy... as if hezbollah ever changed since 2004... tell us the nwhat has changed in hezbis positions? LOLLLLLL

Again? They should get another stand up comedian. He's not even funny anymore !

Just think of it this way if his speeches were so life changing would the two Kizb supporters here be trying to defend him? furthermore have they said anything in his defense that has changed any persons mind here? The premise of their concern is for Kizb to sound like its defending Lebanon while its doing Israel its dirty work....one Jihad at a time!

sure we know how FPMers changes... from qualifying hezbollah as terrorists to "patriots" LOLLLLLL

facts are stronger than all the stupid posts you'll ever send here....

Boy if I am a robot you got to give me credit as I ask you questions that you cannot answer lol. As for M14 and drones I am also hopeful they are here to debate and share their ideas to insure Lebanon stays independent and free from Iran, Syria, KSA and Zanzibar for its livelihood. All humans look to improve themselves if they want to get ahead in life and those who opt to do the opposite should expect that the scenery will not change :-) and thanks for calling me haboob as I know you mean well and I do appreciate that!