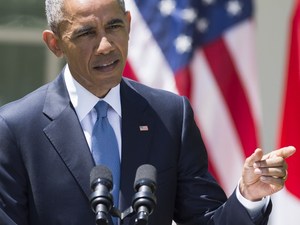 U.S. President Barack Obama's administration on Monday approved petroleum giant Shell's request to drill for oil and gas in the Arctic under certain conditions, despite opposition from environmental groups.

The decision by the Bureau of Ocean Energy Management granted Shell the right to explore the Chukchi Sea as long as the Anglo-Dutch firm gets the correct permits from the agencies that regulate the environment and marine mammal health.

"As we move forward, any offshore exploratory activities will continue to be subject to rigorous safety standards."

Environmental groups oppose drilling in the Arctic due to the vulnerability of animals that are already struggling with the melting sea ice and the risk that an oil spill would pose to the region.

"Once again, our government has rushed to approve risky and ill-conceived exploration in one of the most remote and important places on Earth," said Oceana deputy vice president Susan Murray.

In April 2010, the explosion of the BP-leased Deepwater Horizon in the Gulf of Mexico killed 11 people and spewed 4.9 million barrels of oil into the sea.

Shell put its drilling plans for the Alaska Arctic on hold in 2013 following multiple embarrassing problems with its two rigs.

One, the Kulluk, washed ashore after breaking loose from towing vessels in stormy seas in southern Alaska in January.

Another, the Noble Discoverer, was recently cited by the U.S. Coast Guard for numerous safety and operational deficiencies.

Both rigs were sent to Asia for repair and maintenance work.

Shell spokesman Curtis Smith said the company's revised plan for exploration of the Chukchi Sea "is an important milestone and signals the confidence regulators have in our plan."

He added that operations are scheduled to begin this summer, as long as "the remainder of our permits be practical, and delivered in a timely manner."