Who has Planted the Most Carbon-Storing Trees? China's 'Green Great Wall' Takes the Prize 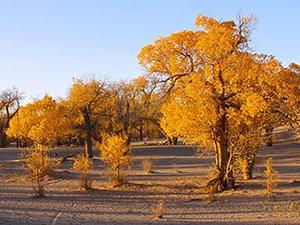 According to a study published recently in the journal Nature Climate Change, the total amount of carbon stored in all living biomass above the soil has increased globally by almost 4 billion tons since 2003, with China contributing in a notable way to the increase.

"The increase in vegetation primarily came from a lucky combination of environmental and economic factors and massive tree-planting projects in China," said Liu Yi, the study's lead author, in a press release. Liu is a remote sensing scientist from the Center of Excellence for Climate System Science at the University of New South Wales in Australia.

Liu noted that "[v]egetation increased on the savannas in Australia, Africa and South America as a result of increasing rainfall, while in Russia and former Soviet republics we have seen the regrowth of forests on abandoned farmland. China was the only country to intentionally increase its vegetation with tree planting projects."

In an email interview, Liu told ClimateWire that "the most apparent vegetation increase over China is observed in northern China, which is likely related to the Green Great Wall." Besides that, there has been some increase in vegetation in southeastern China, though there is no clue as to the cause of that increase, the scientist said.

China's Green Great Wall -- formally known as the "Three-North Shelter Forest Programme" -- is regarded by some experts as the largest ecological engineering project on the planet. Since 1978, at least 100,000 square miles of forests have been planted by Chinese citizens across the arid north, in an effort to hold back the creeping Gobi Desert. Once the project is completed in 2050, a massive belt of trees will stretch from northwestern China's Xinjiang through several northern regions to the country's northeastern part, Heilongjiang province.

The introduction of the Green Great Wall, however, has doubters in the scientific community. Some scientists worry that planting trees where they do not grow naturally may do more harm than good, soaking up large amounts of valuable groundwater. Others question the mortality rate of trees planted there and whether these trees would negatively affect grass and shrubs, which in general are more resistant to drought and more effective at erosion control.

"The ecological issues are complex, and long-term results are not clear," said David Shankman, a professor emeritus of geography at the University of Alabama in Tuscaloosa, as well as a prominent critic of China's Green Great Wall project.

Liu, who cooperated with a team of international scientists tracking the changes in global vegetation, said that he does not have the full picture of the debate. "But from our satellite observations, we can see that the tree-planting project is able to increase the carbon stored in the vegetation standing above the ground, which can help remove some carbon dioxide from the atmosphere," Liu said.

The study shows that China's afforestation efforts, together with regrown forests in Russia and neighboring countries, offset roughly half of the carbon loss by tropical deforestation. While the world is getting greener as a whole, massive vegetation loss is still occurring in many regions, with the greatest decline to be seen on the edge of the Amazon forests and in the Indonesian provinces of Sumatra and Kalimantan.

Liu and his colleagues mapped changes in vegetation biomass using satellite measurements of changes in the radio-frequency radiation emitted from the Earth's surface, a technique called passive microwave remote sensing. The information was extracted from several satellites and merged into a one-time series covering the last two decades from 1993 to 2012.

Plants play a significant role in slowing down climate change, absorbing about a quarter of the carbon dioxide that people are putting into the air by burning fossil fuels and other activities. The study's authors say that although increased greenness means more absorption of carbon dioxide, the only way to diminish the impacts of global warming in the long term is to reduce the use of fossil fuels.