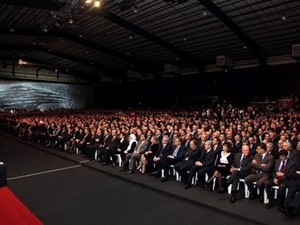 The March 14 General Secretariat concluded on Thursday a workshop for its preparatory commission, which is tasked with proposing the roadmap of the upcoming stage and the bylaws of the the coalition's National Council.

According to a statement issued by the secretariat, the commission failed to reach an agreement over the council's final manifesto, which includes political parties, independents and civil society activists.

The statement said that seven official meetings were held at the secretariat's headquarters with the attendance of the majority of the members.

“Due to the national need, the independents decided to prepare for their own National Council,” the statement read.

The secretariat said that “it will continue coordination between the components of the March 14 alliance to preserve its unity.”

The March 14 camp announced the formation of a National Council comprising political parties, independents and civil society activists, following a closed-door conference marking the tenth anniversary of the coalition's birth.

The coalition was established in March 2005 in the aftermath of the assassination of former Prime Minister Rafik Hariri, which was largely blamed on the Syrian regime at the time.

On March 14, 2005, a month after Hariri's murder, hundreds of thousands of Lebanese flocked to downtown Beirut to demand the withdrawal of Syrian troops from Lebanon after a nearly 29-year presence. The mass rally was later dubbed the Cedar Revolution or Independence Uprising.

The Syrian withdrawal did take place in April of that year.

Can we stil plan a common living with Ebola?