Catching Waves and Turning Them into Electricity 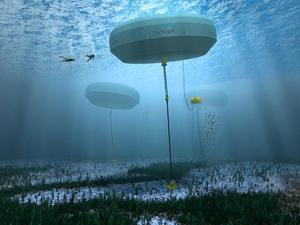 Off the coast of Western Australia, three big buoys floating beneath the ocean’s surface look like giant jellyfish tethered to the seafloor. The steel machines, 36 feet wide, are buffeted by the powerful waves of the Indian Ocean. By harnessing the constant motion of the waves, the buoys generate about 5 percent of the electricity used at a nearby military base on Garden Island.

The buoys are a pilot project of Carnegie Wave Energy, a company based in Perth and listed on the Australian Securities Exchange. In late February, the buoys started supplying 240 kilowatts each to the electricity grid at HMAS Stirling, Australia’s largest naval base. They also help run a desalination plant that transforms seawater into about one-third of the base’s fresh water supply.

Renewable energy is not an urgent matter in Australia, given the country’s plentiful supplies of fossil fuels, particularly coal. But Carnegie’s demonstration project is ultimately aimed at island nations that must import expensive fuel for electricity, as well as military bases looking to bolster energy and water security.

“Island nations are all looking to be sustainable,” said Michael E. Ottaviano, chief executive of Carnegie. Wave energy could be a good fit, especially for islands where tropical clouds impede solar power or where wind turbines disturb the aesthetics of tourist destinations.

Given the ocean’s power, wave energy seems a promising source of renewable energy. Over the last two decades, companies have developed various designs, including a snakelike apparatus with hinged joints from Pelamis Wave Power, a pioneering Scottish company that connected wave power to the grid in 2004; a tubelike device from Ocean Power Technologies of New Jersey and bobbing buoys from AWS Ocean Energy of Scotland.

But wave energy remains largely experimental. The equipment is easily damaged by relentless waves and strong storms. And there is a scarcity of large investments needed to refine and test designs. In a blow to the industry, Pelamis collapsed late last year after it failed to secure adequate financing. In addition, the Scottish wave energy company Aquamarine Power in December announced plans to cut jobs.

“The biggest challenge is funding,” said Mr. Ottaviano. “Any power generation product is capital-intensive. Anytime you want to test an idea, it costs millions of dollars.” Energy technologies that are mainstream today, like nuclear power, were developed for commercial use with government research and support, he said.

Carnegie’s pilot project, named Ceto 5 after the Greek sea goddess Ceto, began with more than $30 million in financing from investors and the Australian government, including $13.1 million from the Australian Renewable Energy Agency and $7.3 million from the Low Emissions Energy Development Program for Western Australia. Carnegie has been working on its Ceto technology since 1999, with cumulative investment of more than $100 million.

To battle the elements that make wave energy so difficult to produce, this technology differs from most other wave energy designs. Its buoys sit three to six feet underwater, rather than float on the surface. This helps shield the equipment from pounding waves. Mr. Ottaviano, who grew up in Perth, near the ocean, said, “Everyone knows when you see a wave the intuitive reaction is to dive underneath.”

The constant rocking of the ocean drives hydraulic pumps that push seawater and other liquids through a pipe to a power plant nearly two miles away on Garden Island. There, the high-pressure water turns standard hydroelectric turbines, which power a generator.

Wave energy from the buoys also pumps high-pressure water through the desalination plant, without using fossil fuels. In contrast, many desalination plants use diesel fuel or electricity to pump saltwater at high pressure through membranes to yield fresh water.

Carnegie is already planning to start using larger, better-designed buoys in 2017 that could each generate one megawatt of electricity. The new technology, called Ceto 6, would use buoys 65 feet wide that could produce four times the energy of the current prototype.

The new technology would generate electricity inside the buoy instead of at an onshore power plant. The electricity would be carried to shore by underwater cables, rather than by pumping water through a pipe. These larger buoys would also sit in deeper water, more than seven miles from shore, where waves are larger and have more energy. The newer buoys would be easier to maintain because they would be self-contained units that could be towed back to shore.

Ceto 5 uses heavy machinery on the sea floor next to each pump to smooth the flow of the piped water. Because no water is pumped with the newer buoys, this equipment is not needed. Ceto 6 is expected to generate 30 to 40 percent of the naval base’s electricity at a cheaper rate.

Carnegie estimates that using the improved buoys in large wave farms of 100 megawatts would reduce rates to 12 to 15 cents a kilowatt-hour — a price comparable to commercial electricity in the state of Western Australia. But on a small scale, wave energy is still costly. Carnegie’s current design generates electricity at a cost of about 40 cents a kilowatt-hour. This is competitive with electricity from diesel, said Mr. Ottaviano, hence Carnegie’s focus on island nations that rely on diesel.

“What is needed is a well-thought-out wave energy strategy by governments, but which no country has yet formulated. The Scottish government has come closest,” said Tom Thorpe, founder of Oxford Oceanics, a wave energy consulting firm in Britain. “It’s not rocket science. It’s what the Danish government did with wind energy, and that is the bedrock of today’s success for that technology.”