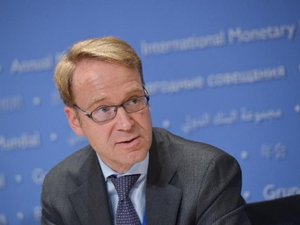 The head of the German central bank or Bundesbank hit out in a newspaper interview Friday at the ongoing provision of emergency liquidity to Greek banks by the European Central Bank.

Given the fact that the ECB is banned under its statutes from financing states' debts, "I don't feel it's correct that banks with no access to the markets are awarded loans used to finance the government debt of a country which also has no access to the markets," Bundesbank president Jens Weidmann told the business daily Handelsblatt.

Previously, the ECB had agreed to accept Greek sovereign bonds as collateral for loans under a special waiver mechanism. But the ECB rescinded that waiver until Athens agrees a new debt deal with its creditors.

Without it, Greek banks now rely solely on ELA.

Asked whether the ECB should also shut down that particular liquidity lifeline and risk pushing Greece out of the eurozone, Weidmann insisted that the solution to the Greek crisis lay in the hands of the politicians.

"The more the impression arises that we are bending our rules and taking on a political role, the more difficult it will be to keep to our mandate," Weidmann said.

"The ball is very firmly in the court of the Greek government. It must commit its country to a course of fundamental reforms. The provision of further financing can buy more time. But it cannot remedy the lack of competitiveness," Weidmann said.