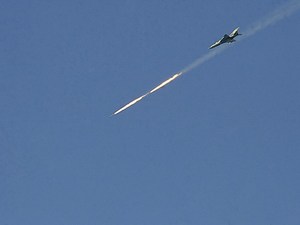 Turkish armed forces on Saturday shot down a Syrian helicopter that violated Turkey's airspace in the south of the country, the Turkish defense minister said.

"A Syrian helicopter was downed that violated the border for a period of five minutes within a seven mile (11 kilometer) limit," Defence Minister Ismet Yilmaz was quoted as saying by the Dogan news agency.

Syrian state television had earlier indicated the aircraft was a drone.

"Having rightly fulfilled their duty, I congratulate the armed forces and kiss the eyes of them all," Yilmaz said, using a traditional Turkish expression.

He did not give any further details on the helicopter.

The incident happened in the area of the Cilvegozu border crossing in the Hatay region of southern Turkey on the Syrian border, he said.

Military sources quoted earlier by Turkish media said it could have been a plane, helicopter or unmanned drone that had been shot down by the Turkish F-16s.

"At the moment, investigations are being made," a source told the Hurriyet daily, saying the targeted craft had broken into three pieces and crashed on the Syrian side of the border.

Syria meanwhile vehemently denied it could have been a manned aircraft.

"It is not true that Turkish fighter jets shot down a Syrian plane. What was shot down was a small drone flying nearby," Syrian state TV said, citing a military source.

Turkish President Recep Tayyip Erdogan has emerged as one of the main opponents of Syrian President Bashar Assad, saying his exit is key to solving the conflict.