Two-Day Strike in Greece Against Austerity 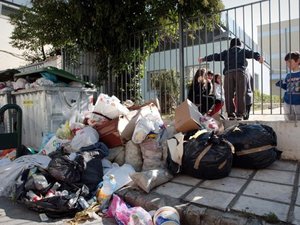 Greek unions on Wednesday launched a two-day general strike in an all-out effort to block a new austerity bill that parliament must pass this week to forestall a state bankruptcy.

Most of the country's professional classes joined the walkout including civil servants, tax collectors, doctors, teachers, sailors and taxi owners while traders, petrol station operators and bakers also shut down their businesses in protest against the government's economic policies.

The main unions, GSEE for the private sector and Adedy for civil servants, will head demonstrations in Athens starting 0800 GMT.

The new cuts are demanded by the EU and IMF in return for the latest loans from a 110-billion-euro ($151-billion) rescue program agreed last year.

The Greek state has enough money to pay its bills through mid-November. On Tuesday it raised 1.625 billion Euros in a sale of three-month treasury bills but had to offer a steeper interest of 4.61 percent.

On Tuesday, media held a 24-hour blackout and some 2,000 journalists protested in central Athens against layoffs as state data showed unemployment climbing to 16.5 percent and the government struggled to galvanize support for the crucial reform bill demanded by Greece's creditors.

The latest strike comes a day after Moody's ratings agency downgraded Spanish debt, delivering a vote of no confidence in Spain and the European Union's handling of the debt crisis so far.

The Greek government is expected to weather Thursday's austerity vote in parliament.

Prime Minister George Papandreou late Tuesday urged his Socialist deputies, who hold 154 seats in the 300-member parliament, for "unity" and to "show proof of responsibility," during the vote.

"We have very tough negotiations ahead of us," he said, urging Europe "which has not been capable up till now of finding a solution," to " take decisions to put an end to the uncertainty which reigns over the Eurozone or else it will be difficult for Greece and European countries to emerge from the crisis."

Taking a lead from Germany, Finance Minister Evangelos Venizelos tempered earlier optimism for an EU debt crisis summit on the crisis on Sunday.

"We must not have great expectations," he said ahead of a meeting with President Carolos Papoulias.

But he warned: "If Europeans fail in Greece, they will not be able to shield themselves (either)."

The government has repeatedly warned that failure to pass the legislation ahead of the summit would prompt Greece's peers to block the release of loans and cause a payments freeze.