Meet The Gauls -- Minus The Dolmens 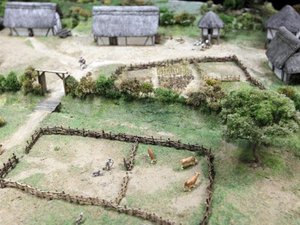 Feisty forest-dwellers in winged helmets, with a fondness for roast boar, strong wine and Roman-bashing. That is the pen portrait of the Gaul as summed up by the pint-sized comic hero Asterix -- and it is wrong from start to finish.

Drawing on three decades of archaeology, "Les Gaulois", an exhibition opening this week at Paris' Cite des Sciences, debunks popular myths about the Celtic tribes, known collectively as the Gauls, who peopled modern-day France before the Roman invasion.

And far from brutish war-mongers, the show reveals them to be sophisticated farmers, traders and craftsmen.

"The Gauls didn't wait for the Romans or Greeks to civilize them," said the archaeologist Francois Malrain, one of the show's curators.

"They lived in a refined society," he explained. "They were clever farmers and breeders, with a metalworking know-how and dexterity that was unequalled across the whole of Antiquity."

Since the Gauls wrote on tablets of wood or wax -- very few of which survived -- their story has been written by others, from the conquering Romans down the ages to the Asterix comic books.

But in the past decade preventive digs, carried out every time a new road is laid or train line built, have uncovered some 500 Gaul sites yielding precious insight into their culture and skills.

Exquisite bronzes -- a tiny cross-legged deity or a bird of prey -- reveal a stylized craftsmanship, a brass boar has the smooth curves of a Brancusi sculpture, while several Gaul coins bear striking similarity to Pablo Picasso's abstract faces.

There were no winged helmets in the Gauls' world -- but a 2004 dig in Tintignac, in the Limousin region, uncovered a treasure trove including a curved swan helmet, and a magnificent carynx, a ceremonial war trumpet.

Dolmens are another Asterix anachronism -- they date from the neolithic -- and so is roast boar: the Gauls were a farmer people, who cleared vast swathes of forestland to rear beef, sheep and pigs.

On the other hand, the Gauls did drink a lot of wine, as evidenced by the presence of amphorae in huge quantities, and traces of a flourishing wine trade that linked the Celts with the Mediterranean world.

Aerial archaeology, which detects vanished dwellings by spotting humus-rich soil from the sky, has shown they lived in dense networks of wattle-and-daub farms, clustering in villages and small towns by the third century BC.

They farmed linseed and poppy seed for oil, black mustard, fennel and coriander for spices, barley and emmer wheat for flatbread and hemp and flax for their textiles.

And while the 60-odd tribes who peopled what is now France, Belgium and Switzerland were not a single unified culture, they were linked by complex trade ties and had a "common cultural foundation," Malrain explained.

Some 200 Gaulish words survive in modern-day French, from the words for horse to zipper, cream to beret.

In a scene-setting prelude to the show, ancient texts, sculptures and paintings show how the figure of the Gaul has fallen in and out of favor over the centuries.

Greek and Roman armies brought home unflattering reports of the people they found in northern Europe.

"Physically, the Celts have a terrifying aspect, a rough and cavernous voice," the Greek historian Diodorus Siculus wrote at the time. "They use few words and speak in enigmas."

Cut to the Middle Ages, when France's kings sought to distance themselves from their brutish ancestors, and the Gaul disappeared from view.

With the French Revolution in 1789, the new-born republic resurrected him as they set about forging a new national image -- witness the bare-chested brave depicted in "Le Courage Gaulien", a 1830 painting by Francois Gerard.

Later that century, Napoleon III bankrolled the first digs to explore Gaul society, and as France smarted from defeat by the Prussian armies in 1870, the Gaul war hero Vercingetorix -- defeated at Alesia in 52 BC and executed in Rome -- became a symbol of French courage in the face of the invader.

In the 20th century with the advent of mass advertising, Gauls were used to sell soap bars or beer -- and of course the enduring Gauloises cigarettes.

Even the collaborationist Vichy regime co-opted the Gaul as a symbol as part of a youth scheme under the Nazi occupation.

And finally, in 1961, the first Asterix comic album was released with its mustachioed hero and barrel-shaped companion Obelix -- whose magic-potion swigging, centurion-bashing antics still shape so much of popular belief.