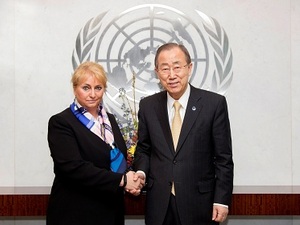 The President and Registrar of the Special Tribunal for Lebanon have concluded a successful visit to the United Nations in New York, announced the STL in a statement on Monday.

Judge Ivana Hrdličková and Daryl Mundis held meetings with the U.N. Secretary General, Ban Ki-moon, and senior U.N. officials, as well as with the representatives of several states.

The Secretary General reaffirmed the commitment of the United Nations to the STL as it works to bring those responsible for the crimes under the Tribunal’s mandate to justice.

The STL President and Registrar also met the Permanent Representative of Lebanon to the United Nations, as well as his counterparts from several MENA and other States.

In addition they met representatives of the EU.

“We are extremely grateful for the strong and enduring support that we receive from the United Nations and so many countries,” said Hrdličková .

“The STL has a unique opportunity through the fulfillment of its mandate, to contribute to the rule of law in Lebanon and beyond. I am very grateful for the continued hard work of my fellow judges and all STL staff members in pursuing this goal.”

The trial of those accused of carrying out the attack on February 14, 2005 that killed 22 people, including the former prime minister of Lebanon, Rafik Hariri, is ongoing at the STL.

lol humble wait till the kizb kids get here and we would be branded yids! I sure hope that the STL is capable of bringing those involved to justice one day even though the bearded goat refuses to allow his innocent sons of peace to leave Da7ieh alive. At least they have a choice its either this or Syrinam, one way or another they please Israel.