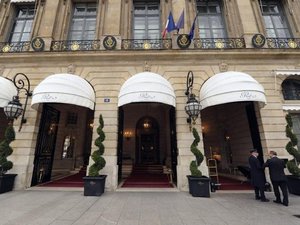 Paris's Hotel Ritz, famed for generations as the city's highest-profile luxury hotel, said Tuesday it is to close for more than two years from next summer for an "unprecedented" renovation.

Once the hotel of choice of Charlie Chaplin, Coco Chanel and Ernest Hemingway -- and the place where princess Diana and Al Fayed's son, Dodi, dined in 1997 before their fatal car crash -- the hotel has not had a major refit since 1979.

In a statement, the hotel said the "unprecedented renovation project" would start in the summer of 2012 and take 27 months. Financial details were not disclosed.

It said hotel facilities, including its 160 rooms and suites, would preserve their traditional style while "offering the latest technological innovations".

Only about 30 of the hotel's about 500 employees would be kept on during the renovation, a hotel spokesman said, adding that "talks are underway" with staff representatives on assistance.

Jacques Lebreton, a CFDT union representative at the hotel, said employees were hoping to receive at least "partial benefits" during its closure "in order to allow them to re-integrate into the company after the works."

Founded in 1898 by Cesar Ritz and French chef Auguste Escoffier, the hotel is also home to L'Espadon restaurant, which has two Michelin stars, and the Ritz-Escoffier cooking school. Both will also close during the renovation.

"This renovation project is indispensable. It is the result of a wide reflection carried out with all of the establishment's partners," Ritz Paris company president Frank Klein said in the statement.