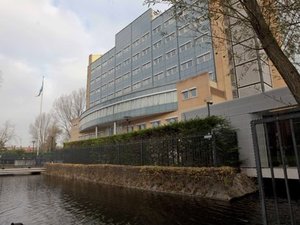 The spokesperson of the Special Tribunal for Lebanon has said there was no direct contact with the court on efforts to refer to it the file of former Minister Michel Samaha, adding the issue required an agreement between the Lebanese government and the United Nations.

“I cannot comment on the statements made by politicians or officials,” Wajed Ramadan told As Safir daily published on Wednesday.

Her remarks came in response to a question on Justice Minister Ashraf Rifi's statements that he was working on transferring the terrorism case of Samaha to the STL.

There have been claims that the explosives which Samaha had transferred to Lebanon were similar to bombs used in murders and assassination attempts after the Feb. 2005 killing of former Prime Minister Rafik Hariri.

Last week, the military court sentenced Samaha to four-and-a-half years in jail over terrorism charges, including the time he served since August 2012.

Rifi promised to submit a draft-law to the cabinet to dissolve the court after a video was broadcast showing the former information minister discussing with undercover police informant Milad Kfouri plans to carry out explosions in Lebanon.

The video was an indication that Syrian President Bashar Assad was aware of the plot, Rifi said.

But Ramadan told As Safir that article one of the STL statute says the court has jurisdiction over persons responsible for Hariri's assassination.

If the tribunal finds that other attacks that occurred in Lebanon between October 1, 2004 and December 12, 2005, or any later date decided by the parties and with the consent of the U.N. Security Council, are connected and are of a nature and gravity similar to Hariri's murder, it shall also have jurisdiction over persons responsible for such attacks.

If such conditions exist, then the prosecutor should inform the STL president, who in his turn would ask for the transfer of his conclusions to U.N. chief Ban Ki-moon, Ramadan said.

The U.N. secretary general would then pave way for the Security Council and the Lebanese government to take the final decision on whether to grant the court the jurisdiction to deal with Samaha's case or not, she added.

Lebanon is controlled by a terrorist party who itself killed Rafik Hariri, so I doubt the Murshid of the Lebanese Republic and its Supreme Leader would agree to such proposal.

Ebola has confiscated the free will of the Lebanese people.

Roar, you keep forgetting to finish your posts under those new aliases, Signed The Roar. 3an jad ennak wesekh.

hizbushaitan will not allow this to happen as it exposes them and the syrian regime more.
they are all a bunch of murderers....

Ebola has assassinated the will of wanting to live together.
They have divided the country like never before.
They are destroying the institutions and using a senile Caporal for achieving their own objectives.

The M8 side led by Hezbollah believed that they can hijack this matter, little did they know that their victims are now smarter than them and will take the battle where so it dictates. Semaha is a real hot potato on their laps. His case will go to the Hague.