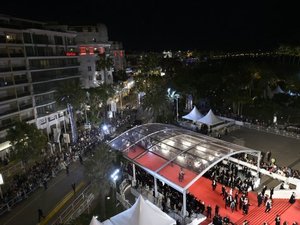 Far from the limelight of Cannes, Greece's last painter of film posters toils away in a little garden studio to deliver his latest commission.

Vassilis Dimitriou is 80 years old, works alone and knows his days on the job are numbered -- his left hand trembles from the early onset of Parkinson's disease.

But Dimitriou, a survivor of Greece's wartime occupation by the Nazis, remains determined to fight his lonely battle against digital printing for as long as he can.

For him, it's an art that truly comes from the heart.

For more than 65 years, the diminutive, beret-sporting artist has depicted all the big names, but some he pays extra attention to.

- Painting from the heart -

"Those I love, I draw well. Those I don't love, I don't draw well," Dimitriou told Agence France Presse.

During the 1960s when cinema was at its peak in Greece, Dimitriou would be commissioned to paint up to 10 posters a week.

Nowadays, only one cinema in Athens, the Athinaion near the centre, has held onto the tradition.

"Painting is a medium that makes it more intimate when everything is becoming more plastic," says the hall's co-owner Virginia Axioti.

"The laminated billboards are something you use one day and throw away the next. We are not of this mentality, we like tradition, we like keeping this connection between the arts," she adds.

"Music, painting, dance, cinema for me are one," Axioti says.

Born in the working-class district of Kypseli in 1935, Dimitriou apprenticed beside a Czech poster-painter and later developed his own style.

In his heydey he had two assistants as well as his wife to lend a hand, and could turn out a poster a day for a dozen cinemas in Athens.

His most recent work includes "Cymbeline", starring Ethan Hawke and Milla Jovovich, followed by the remake of "Fantastic Four" that will hit cinemas in the summer.

On the busy highway in front of the cinema, thousands of commuters pass every day with only a cursory glance at the Athinaion's marquee.

But it was not the case a few decades ago, when film posters could inflame passions.

"Early in the sixties, I had produced a rather risque poster for the times that had the main actress wearing a bikini," Dimitriou recalls.

"The owner had to call me in because a group of angry harpies had gathered in front of the cinema. I had to bring out my brushes to cover the lady up a little," he says.

A few years later, the opposite happened -- Dimitriou was summoned to "undress" Sophia Loren, whose chest was deemed to have been excessively covered.

"When I descended from my ladder, several men had gathered to applaud," he says.

A child of Athens' traumatic occupation by Nazi German forces during World War II, during which thousands died of starvation, Dimitriou still remembers going hungry most of the time.

"My mother kept on saying, 'our children are going to die,'" he says.

Like most children his age, he would climb a tree adjoining his neighbourhood's open-air cinema to steal looks at the films being shown.

One night, cinema employees dragged him down and he fell inside the cinema courtyard, a story that would play out similarly to the plot of Italian classic "Cinema Paradiso".

"It was my opportunity. The projectionist offered to let me watch the films for free if I helped him with the booth," he says.

"Later on, the manager saw some of my sketches and told me to seek an apprenticeship."

The painter says he is determined to stick to his art for years to come.

"I feel I can always do better," he says.

But Dimitriou no longer goes to the movies.

He says he misses the era "when one would dress up to go to the cinema, and later meet in the foyer for a drink at the intermission".