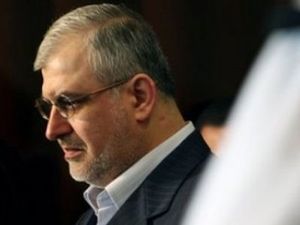 Al-Mustaqbal bloc described on Friday alleged threats by Hizbullah MP Mohammed Raad against the movement's officials as an “aggression on civil peace,” saying they were a reflection of “terrorism” proliferating in the Middle East because of the party's main backer Iran.

Raad's threat to al-Mustaqbal Secretary General Ahmed Hariri and Justice Minister Ashraf Rifi, “which is assault on civil peace, is the other face of the extremist and terrorist movements that are proliferating in the region because of the way Iran behaves and orders its followers,” the bloc said in a statement.

The head of the Loyalty to the Resistance bloc's remarks “proved once again that Hizbullah violates all customs and traditions,” it said.

His “shameful” remarks are evidence of “lack of balance.” But “they will not terrorize the Lebanese and al-Mustaqbal movement because it believes in Lebanon,” the statement added.

“The last person to talk about the statelet is the justice minister,” Raad told al-Mayadeen TV earlier this week in response to calls made by Rifi to abolish Hizbullah's so-called mini-state.

As for Ahmed Hariri, he will “pay the price” later on because he is of higher rank than Rifi, the MP said.

Raad did not hesitate to make verbal threats against the two officials at a time when Hizbullah members are accused of carrying out the assassination of former Prime Minister Rafik Hariri, said the Mustaqbal statement.

Five Hizbullah members have been charged with plotting Hariri's Feb. 2005 murder in a massive explosion at the Beirut seafront but have not been arrested.

Their trial in absentia began in January 2014 and is ongoing.

The Mustaqbal bloc said Hizbullah would be held responsible for any harm inflicted on Ahmed Hariri and Rifi.

“Hizbullah will be held accountable by the Lebanese people in general and the Shiite sect in particular … for violating national consensus and shoving Lebanon and the Lebanese in several crises,” it said.

raad, in particular, defended samaha when he was arrested, and now is openly threatening rifi and hariri! this is an extremist shia terrorist that has done nothing good for Lebanon.
all the followers of hizbushaitan and the fpm who are really Lebanese should wake up finally and realize who they are following.

We've heard this one before, Mostaqbal yelling and screaming. Your words fall to deaf ears ya Wahabis.

correction: it is not deaf ears, rather it is totally brainwashed iranian followers.

Just like Wahabis call us Rafidah? There's a difference between normal muslim sunnis and takfiris chopping people up.

You are a salafi I presume, so who cares about your false claims and Mostaqbali propaganda, just like you say it's your community ISIS and Nusra being targeted by the LAF. Political cover

O how badly the mighty are known to fall. The secret of the whole thing is not to reach the summit, but to stay there. Here was once a noble resistance, trusted, respected and admired, but as time passed and the seasons changed, the snake shed its skin and now has become anything but Lebanese. As it shed its skin, it was bitting everyone that stood on its way. If we are to follow this militia for rent's aims, their next war will be fought in Myanmar.

Raad speaks the words and language he's been taught by his sectarian terrorist militia...

while hezbollah slams mustaqbal and mustaqbal slams hezbollah the country is still in a deep economic crisis... who is taking care of it? LOL

If there was any doubt in my mind that Hezbollah was behind the assasination of Rafik Hariri and countless other political martyrs since 2005.....Thanks a lot for assuring me, Mr Raad. The Hague next, I presume..