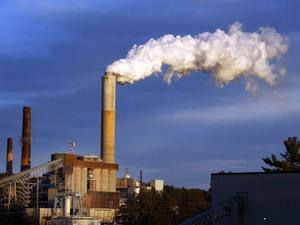 New carbon emissions standards that were proposed last year for coal-fired power plants in the United States would substantially improve human health and prevent more than 3,000 premature deaths per year, according to a new study.

The study, led by researchers at Syracuse and Harvard Universities, used modeling to predict the effect on human health of changes to national carbon standards for power plants. The researchers calculated three different outcomes using data from the Census Bureau and detailed maps of the more than 2,400 fossil-fuel power plants across the country.

The model with the biggest health benefit was the one that most closely resembled the changes that the Environmental Protection Agency proposed in a rule in June. Under that plan, reductions in carbon emissions for the plants would be set by states and would include improvements to the energy efficiency of, for example, air-conditioners, refrigerators and power grids.

The health benefits of the rule would be indirect. While carbon emissions trap heat in the atmosphere, which contributes to a warming planet, they are not directly linked to health threats. Emissions from coal-fired power plants, however, also include a number of other pollutants, such as soot and ozone, that are directly linked to illnesses like asthma and lung disease.

Researchers calculated that the changes in the E.P.A. rule could prevent 3,500 premature deaths a year and more than 1,000 heart attacks and hospitalizations from air-pollution-related illness.

The study was published Monday in the journal Nature Climate Change. The largest declines in pollution — and consequent benefits to health — would happen in states in the Ohio River Valley, including Pennsylvania and Ohio, which have some of the highest levels of emissions, researchers said.

Charles T. Driscoll, a professor of environmental systems engineering at Syracuse who was the lead author of the paper, said research began about a year before the E.P.A. proposed the carbon reduction plan. It was a coincidence that one of the researchers’ models so closely resembled the federal proposal.

The model with the deepest cuts in emissions was based on the use of a carbon tax, but because energy efficiency was not part of that version, it prevented fewer premature deaths, researchers found. The third version, which assumed that plants would be revamped and modernized, an effort that some industry representatives favor, produced almost no change in air quality or health benefits.

“The idea is to inform the federal and state governments that your state and federal policy matters,” Dr. Driscoll said.

The rule will chiefly target coal-fired power plants, the nation’s largest source of carbon emissions. They would require every state to submit a plan to shift their energy systems from heavily carbon polluting sources of power, such as coal plants, to cleaner power sources.

In making the case for the rule, the Obama administration has highlighted its indirect health benefits. Mr. Obama’s political advisers have made the bet that a policy presented as a move to reduce childhood asthma and other diseases will gain more public traction than a complex new energy policy designed to reduce global warming in the long term.

Critics say the rule would increase the cost of energy, an outcome that would harm lower-income Americans.

Scott Segal, director of the Electric Reliability Coordinating Council, an energy industry association, said it was an overstatement to claim that the rule would prevent so many premature deaths, because the reductions would bring emissions levels well below what the E.P.A. has previously said could harm health. He said the administration had already claimed the same benefits justify other rules, which amounted to double counting.

“It’s like Enron-style accounting,” he said, referring to the energy company that collapsed after revelations about flawed accounting standards.

Dr. Leonard Bielory, a researcher at Rutgers University who was not involved in the study, said that it did manage to show that the rule would bring positive health effects, but that the extent was far from clear. “Are these the real numbers you’ll save?” he said. “That’s really a gray zone.”

Dr. Driscoll acknowledged the hazards of precision in a modeling exercise, but said the paper tried to quantify the uncertainty. For example, the projection of 3,500 deaths prevented was an average of a much broader range of 780 deaths to 6,100 deaths.The challenge for Audi will be ramping up its fuel from a science project to a commercial success. It seems to have ambitions to do so: it has been pursuing carbon-neutral fuels since 2009, and its partnership with Sunfire is just one of several collaborations with energy companies.